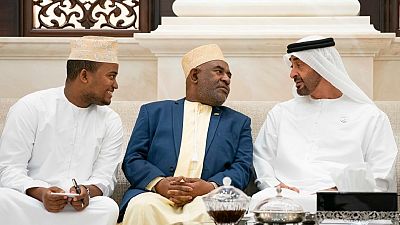 His Highness Sheikh Mohamed bin Zayed welcomed the visit of President Assoumani and exchanged with him greetings on the holy month of Ramadan and then engaged in talks about ways of enhancing bilateral cooperation across economic, trade, investment and development spheres in a manner that realises aspirations of the two peoples. They also discussed the possibilities of opening up new avenues of joint cooperation.

During the meeting, Sheikh Mohamed and President Assoumani tackled the latest regional and global developments of mutual interest and exchanged views on them.

Sheikh Mohamed affirmed the UAE's interest to support efforts for sustainable development and building in brotherly and friendly countries to fulfill aspirations of their peoples and generations for development, stability and prosperity.

H.H. said the UAE was looking forward to see its friendship and cooperation ties with the Comoros scale new heights of growth, particularly in developmental and economic sectors.

For his part, President Assoumani expressed his delight at visiting the UAE, which he commended for supporting the humanitarian programmes and other developmental, economic, social, educational and infrastructure projects in his country.

He also voiced his country's desire to increase cooperation with the UAE, which he said set an ''inspirational development model'' for other countries of the world and an global trade and investment centre as well as a capital for tourism and culture.