In a packed auditorium, two migrant returnees share their experiences: One, a trained professional with a university degree, made do as a school janitor in Morocco. The other survived six years’ imprisonment in Zambia.

The two met at a gathering here, the third ‘Migration Conversation’ – a platform arising from a partnership between the International Organization for Migration and a private Kenyan university, the United States International University Africa.

IOM’s reintegration assistance for returning migrants includes medical help for those who need it, psychosocial support, links to employment opportunities, and training in entrepreneurship. Another service offered is family tracing and reunification for unaccompanied minors.

Since 2017, IOM has adopted a holistic reintegration approach for migrants that also involves communities. Migrants learn to talk about their experiences in ways that help them overcome the shame of failure – or worse. Many find it difficult to face those they feel they may have disappointed – friends, family – or borrowed money from.

That’s what brought Mary, the Kenyan school teacher, to the podium here. But she was eager to share her story with the audience.

She discovered upon her arrival in Casablanca that French and Arabic are the main spoken languages in Morocco. She speaks neither, thus, the only job she could get was to work as a cleaner.  “No matter what your problems are at home, sit down,” she told the attentive audience, composed mainly of students. “Think about where you are going and take the right documents.”

After about two years in Casablanca Mary was moved to try her luck in Europe, when someone persuaded her that “Europe, after all, is only 45 minutes from Morocco.”

So, she paid USD 500 to agents and travelled to Rabat, where she joined many others who were due to cross the Atlantic for Spain.

But she changed her mind. “I met people who were still waiting for the chance of going to Europe after six months,” Mary explained.

And she had another reason: a migrant boat bound for Spain had capsized. She knew some of those who died. “It dawned on me that I might not get to Spain alive,” she recalled.

Now saddled with an expired tourist visa and unable to buy an air ticket to Kenya, Mary sought help. The EU-IOM Joint Initiative for Migrant Protection and Reintegration (the Joint Initiative) stepped in and funded her journey home, and her subsequent reintegration. Mary is now back in her village, running a dry cleaner's business. “I’m doing fine, I’m recovered,” she said.

Ethiopian returnee Biruk narrated how he left his home country for a better life in South Africa, only to spend six years in a Zambian prison.

The push resulted from a rumour in his village that there was a man who could make anyone rich within a short time. Thus, Biruk’s parents raised money from relatives and paid the smuggler USD 3000 for their son, who had just completed the third grade, to travel to southern Africa. “He said he’d process the visa and take me to South Africa.”

Biruk was flown to Nairobi. But soon after, the journey took a turn as the trek through Tanzania and Zambia was undertaken mainly at night through the bush, sometimes in packed pick-up trucks and nearly air-less containers. Hunger, thirst and fear were constant companions.

Arrest followed in Zambia, with Biruk being part of a group of fellow Ethiopians, Pakistanis and Bangladeshis who were sentenced to 15 years’ imprisonment. He was released after six years, thanks to intervention by IOM.

The Joint Initiative also assisted him to start afresh. He returned home to find that his parents had died and that his siblings had sold or divided their properties, leaving him destitute and living off the kindness of friends and strangers.

Soon after returning, the Joint Initiative enrolled Biruk in its reintegration programme. As a result, he now employs four people in his two barbershops.

The platform shared by Mary and Biruk is the second time IOM and the university have collaborated. Established in 2017, the initiative is described by IOM Regional Project Development Officer Julia Hill-Mlati as an example of how the UN can work with academia.

The university’s deputy vice-chancellor (academic and student affairs) Professor Ruthie Rono says the partnership with IOM “is something very fortunate to have”.

Download logo
Biruk narrates how he left his home country for a better life in South Africa, only to spend six years in a Zambian prison. Photo: IOM 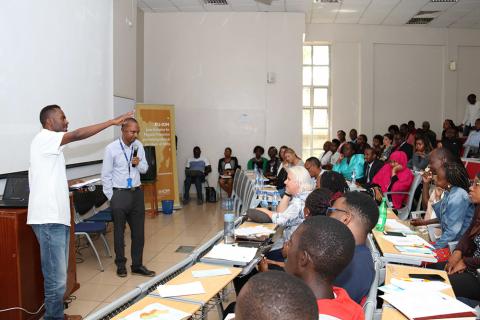