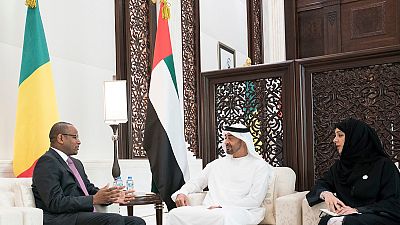 His Highness Sheikh Mohamed bin Zayed Al Nahyan, Crown Prince of Abu Dhabi and Deputy Supreme Commander of the UAE Armed Forces, received today Prime Minister of Mali Boubou Cisse, who is currently in a visit to the UAE.

During the meeting, held at Al Bateen Palace, His Highness Sheikh Mohamed bin Zayed and Cisse discussed friendship and cooperation between the two countries and ways to enhance them in various fields, especially the economic, investment and infrastructure domains to meet the aspirations of the two countries and peoples into wider futuristic cooperation.

They exchanged views on a number of issues and topics of mutual interest and the latest regional and international developments.

Sheikh Mohamed welcomed Malian Prime Minister's visit and wished that it would open up new cooperation horizons and joint work between the two countries.

Sheikh Mohamed emphasised that the UAE is keen on supporting development and building efforts in vital sectors with fraternal and friendly countries for the benefit of their peoples.

He said that cooperation approach with friendly peoples to achieve progress and renaissance is one of the main components of the legacy of the late Sheikh Zayed bin Sultan Al Nahyan who laid the foundation stone for building relations with other peoples and the UAE is following this longstanding legacy.

Cisse expressed his happiness at visiting the UAE and meeting with Sheikh Mohamed bin Zayed. He stressed his country's keenness on enhancing cooperation with the UAE to achieve the aspirations of the two countries and mutual interests.

He praised the support provided by the UAE in the development and humanitarian projects in his country. He also lauded the UAE's initiatives and role to promote tolerance, co-existence, peace, security, and development regionally and globally. He said that the UAE will remain a giving and peace oasis for humanity.

The two sides affirmed the joint desire to develop joint cooperation based on the strong and distinguished relations through supporting all aspects of cooperation, especially in the trade, investment and development domains that enhance mutual interest.

Malian Minister of Energy and Water Sambou Wagué; Minister of Mines & Petroleum Lelenta Hawa Baba Bah; and Malian Ambassador to the UAE Boukary Sidibe attended from the Malian side.