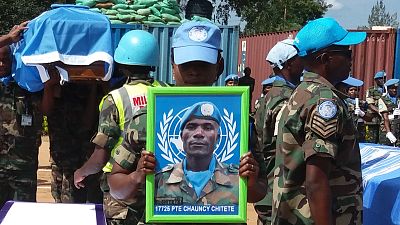 On Friday, 24 May, Secretary-General António Guterres will award the “Captain Mbaye Diagne Medal for Exceptional Courage” to the late Private Chancy Chitete of Malawi during the International Day of UN Peacekeepers commemorations at UN Headquarters in New York. The Diagne Medal, established in 2014 “to recognize uniformed and civilian personnel who demonstrate exceptional courage”, is named for the late Captain Diagne who saved hundreds of lives in 1994, before he was killed while serving as a UN peacekeeper in Rwanda.

The inaugural medal was presented to Captain Diagne's family in his honour in 2016, but despite a number of remarkable nominations over the past four years, the awarding of the Medal to Private Chancy Chitite of Malawi will mark the first time the actions of a UN peacekeeper have been found to meet the standard set by Captain Diagne.

Last November, Tanzanian and Malawian peacekeepers serving with the United Nations Organization Stabilization Mission in the Democratic Republic of the Congo (MONUSCO) came under heavy fire while conducting “Operation Usalama” in the eastern part of the country against the ADF, an armed group that had been terrorizing civilians and disrupting vital Ebola response. During the operation Private Chitete saw a badly wounded Tanzanian peacekeeper, Corporal Ali Khamis Omary, who was unable to move and was exposed to enemy fire. Leaving his unit, Private Chitete single-handedly brought his wounded comrade to safety, sustaining fatal injuries while providing life-saving first aid. Corporal Omary survived, and Private Chitete’s heroism and sacrifice helped the peacekeepers achieve their objective and dislodge the ADF from its stronghold.

“The remarkable actions of Private Chitete helped protect many lives, both civilian and military” said Under-Secretary-General Jean-Pierre Lacroix. “His sacrifice underscores the dangers our peacekeepers face every day while executing their vital protection tasks in some of the world’s most challenging environments. Private Chitete remains an inspiration to us all and we are proud to honor his memory and commemorate his brave and selfless action.”

It is planned that Private Chitete’s family will receive the medal on his behalf during the Peacekeepers’ Day commemorations in New York on 24 May.