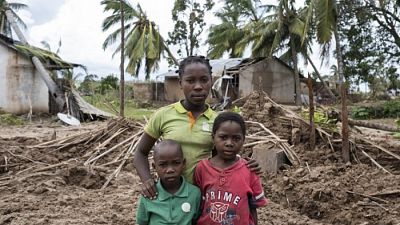 Hundreds of thousands of children affected by deadly Cyclone Idai in Mozambique have been vaccinated and received vitamin A supplements in the past week, with UNICEF and partners including the World Health Organisation (WHO) supporting the Government-led Health Week in the 21 most affected districts of Sofala, Manica, Inhambane, and Zambézia provinces.

Proudly supporting and enabling this effort, UNICEF technical teams were joined by UNICEF’s local Ambassador – musical artist Neyma – who, along with Radio Mozambique, local community radios and multi-media mobile units, reached out to communities explain the importance of the health and nutrition services of the campaign.

More and more communities are returning to their devastated homes or are being resettled to safer areas where basic infrastructure and services need to be built from scratch. Many families have lost everything.

“UNICEF is committed to working with the Ministry of Health and other partners and with communities to ensure that every child is vaccinated and provided with the vitamin A supplementation and other nutrition support they need to survive and thrive, and that that their right to quality primary health care is fulfilled,” said Mr Le Pechoux.

In areas affected by Cyclone Kenneth, which struck just over two weeks ago, UNICEF has been working intensively with partners to assist the Government-led response to treat and prevent the further spread of cholera and other waterborne diseases. Cyclone Kenneth caused major damage to urban electrical systems used to supply water, and the heavy rains infected many rural wells and boreholes making them unusable.

“Preventing the spread of cholera and acute watery diarrhoea is critical to saving children’s lives in these early days of the aftermath of Cyclone Kenneth,” said James McQuen Patterson, UNICEF Health Chief. “Children are especially vulnerable to diarrheal diseases, and working with experts in water and sanitation, communication and health, we are all racing against time to halt the spread of cholera. We can only succeed working as a team.”

In the immediate aftermath of the Cyclone, UNICEF and partners began providing emergency safe water to families in temporary accommodation shelters. Rapidly restoring damaged urban water systems and treating water sources in contaminated rural wells and boreholes were key early achievements. In addition, UNICEF and partners have distributed household water treatment products in cholera “hotspots” throughout the city of Pemba, reaching 134,000 people. Community outreach teams, staffed by health committee volunteers, are working at neighbourhood level to raise families’ awareness about how to stay safe from cholera and other waterborne diseases.

To prevent the spread of cholera, UNICEF with partners in the Government-led Cholera Taskforce is operating Rapid Response teams which immediately deploy to households with reported cases, disinfecting houses and intensifying water treatment in neighboring homes.

In Pemba today, the Government-led Cholera Taskforce launched the cholera vaccination campaign, with support from UNICEF and partners. On 12 May, UNICEF flew in in Oral Cholera Vaccines to reach more than 250,000 people in Cyclone Kenneth-affected areas, purchased with the financial support of the Global Alliance for Vaccines and Immunization (GAVI). UNICEF-supported teams are conducting community awareness and outreach programmes, including working closely with religious and community leaders. Given the Ramadan period, additional measures are being put in place to be able to administer the Oral Cholera Vaccine respecting community needs.

“Cholera and other infectious diseases continue to be a major threat to children and families in these early days after Cyclone Kenneth,” said Mr Le Pechoux. “The two-round Oral Cholera Vaccine campaign is another key step in stopping the spread of cholera, at the same time as we keep our focus on safe water, sanitation and hygiene,” he said. “We are still in the critical days of emergency response to reach every family affected by Cyclone Kenneth, and we have a long way to go to ensure that every child is safe and healthy.”