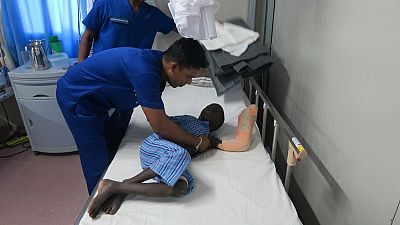 The family of an 8-year-old boy has praised the UN Mission in South Sudan for saving the arm and quite possibly the life of their child, who was bitten by a snake in Bor North county in the Jonglei region.

The boy was attending to a herd of goats in Jalle when the venomous reptile sank its frighteningly fabulous fangs into his arm, to devastating effect.

He was rushed to the peacekeeping mission’s hospital, where Sri Lankan medical staff performed immediate surgery that saved his arm from amputation.

“I am thankful that my brother will live,” said the boy’s elder brother Ayii Ayuen.

He commended the professionalism and swift, selfless performance of UN peacekeepers.

“We assumed he would die after the infection had worn off his skin,” he said.

Jalle is one of the Payams, (local administration unit) in Jonglei State that has witnessed some of the worst communal fighting over the years.

The hostilities are characterized with cattle raid, abduction and killing of innocent people. Most of the residents have been displaced either internally or across the borders to neighboring countries.

The primary health care centre in Jalle, a severely war-ravaged district, has been deserted since the outbreak of armed conflict in 2013. Residents must travel 56 km to access medical services in Bor, where the main hospital is also frequently lacking necessary resources.

Fortunately, medical staff at the UN peacekeeping mission’s clinic proved capable and equipped enough to save the snake-bitten child. His wound was badly infected, and surgery was needed to save his arm. The boy is expected to be discharged on Saturday.

“Now the child is fine. If he had not arrived here as quickly as he did, he could have been dead by,” says senior medical officer Major Dhanushka Dissanayaka.

This is not the first time that peacekeepers based in Bor save victims of life-threatening bites. The area is located along the Nile and is home to various species of poisonous snakes and scorpions.

Download logo
His snake-bitten arm may have seen better days, but it’s there, thanks to UNMISS medical staff in Bor