Three weeks after Cyclone Kenneth made landfall in northern Mozambique, over 300,000 people continue to need humanitarian assistance in the coastal provinces of Cabo Delgado and Nampula. An estimated 45,000 houses have been either damaged or destroyed according to the Government of Mozambique.

“This was our house,” said Regina, gesturing towards a pile of rubble and a few walls partially standing. She sits on their one remaining chair, with the youngest of her five children in her lap, outside their temporary shelter made of metal roof panels.

Regina and her children are one of over 300 vulnerable families who have thus far received support from shelter teams, organized by IOM and Instituto Oikos, an Italian NGO which has an office on Ibo Island. Teams are installing tarpaulins on damaged homes and temporary shelters. The tarpaulins are provided by the United Kingdom’s Department for International Development (DFID).

“Really, I am not well. I have no hope to have a house tomorrow or the day after tomorrow. We did not have many belongings, but the things that I had of value – our home and beds were destroyed in the cyclone,” she explained.

Regina keeps her few cooking utensils at a neighbour’s house, to ensure they are not stolen. Her temporary accommodation does not have a door.

“No one can help the others, as we all lost our homes,” said her neighbour, Rute. “In the cyclone the wind was very strong. Everyone tried to save themselves. We fled with our children in our arms.  It was not a wind in which children could be left to walk alone.”

Four shelter teams continue to move through the island, assisting in total more than 40 families per day; 1,000 families are slated to receive assistance.

“In speaking with affected communities, it is clear that Cyclone Kenneth has drained their limited resources. The cyclone damaged homes, washed away belongings and ruined their food supply,” said IOM Mozambique Chief of Mission Katharina Schnoring.

“Many families are unsure of how they will afford to rebuild, and need support to manage through this critical period. In discussion with the Government of Mozambique’s Disaster Management Agency (INGC) and humanitarian partners, shelter assistance is a main priority.”

IOM is today conducting a distribution in cooperation with UNICEF, including tarps, water purification drops and soap for nearly 300 families in the heavily affected Macomia district area of Mucojo. Materials are being delivered by helicopter because roads to the area are washed out and littered with fallen trees.

IOM is responding to urgent shelter needs following Cyclone Kenneth through the incoming management of Non-Food Item (NFI) kits, and delivering to humanitarian partners, who are carrying out distributions. Thus far IOM has delivered over 7,000 plastic sheets to partners for distribution in Cabo Delgado (Macomia, Ibo Islands, and Quissinga) and Nampula (Erati and Memba) in order to respond to urgent shelter needs.

Information on affected and displaced populations is challenging to obtain in the areas affected by Cyclone Kenneth, particularly as many communities are cut off from access, and communications and electricity have not yet been restored.

IOM’s Displacement Tracking Matrix (DTM), implemented in coordination with the INGC is carrying out site assessments in seven temporary accommodation sites in Cabo Delgado province. A total of 2,383 individuals were reported across the seven assessed sites.

At all of the sites, damaged or destroyed houses were the primary factor preventing return to areas of origin; the remaining reasons were accessibility, inadequate living conditions and repeated affected by extreme events (floods, strong winds and landslides). The primary need reported in all sites was food, and the most reported secondary need was shelter, including construction materials, shelter or non-food items.

IOM has a long-term presence in northern Mozambique, in support of government and local communities. Cabo Delgado is a key province for IOM, being part of a corridor where many migrants from the Horn of Africa transit en route to reach South Africa.

Download logo
Children on Ibo Island in northern Mozambique, stand next to their newly reconstructed house while a shelter team installs a tarp on the roof. Photo: Sandra Black/IOM 2019 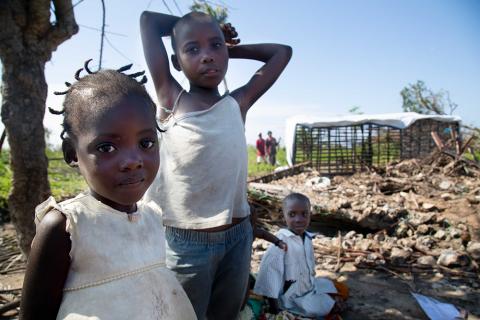