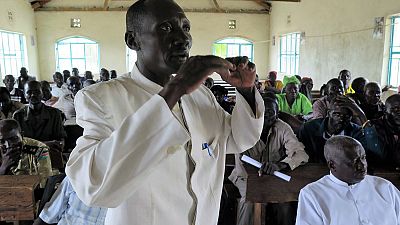 For some, it was a workshop. For others, it was a near-transcendental experience.

“We feel empowered, even transformed, by the information received on how to resolve disputes peacefully. We will participate alongside our elders for peace. Only brains work, not weapons,” says Clement Lotao, chairperson of the youth in Kimotong County, with an air of indestructible conviction.

“We now know what to say to our husbands and the community to bring peace home,” Christine, leader of a women’s group, chipped in.

Recommendations made two years ago during a civil-military dialogue between the South Sudan People's Defence Forces and the six communities of Kimotong County have, slowly, given birth to this potentially life-changing capacity building workshop.

The two-day training, organized by the United Nations Mission in South Sudan, brought together 60 participants, including women, influential youth, traditional priests, representatives of the organized forces and the paramount chief of the area. Those fortunate enough to be in attendance acquired skills in conflict management and mitigation to help reduce tensions within Kimotong County, and with their neighbours.

“Our traditional approach to conflict normally does not satisfy those involved and may sometimes make things worse. With these new skills, it will be possible for each party to walk away in peace,” explained Joseph Kamilo Napengiro, a representative of the Kapoeta government, engaging in self-reflection.

Kimotong County has a long history of conflicts between the community of Buya and the South Sudan People’s Defence Forces deployed in the area. According to the government forces, ambushes and several clashes with the community have resulted in the premature death of more than 60 soldiers between 2016 to 2019.

“Guns in the hands of our young people means they lack respect for the elders. Our cultural values, inherited from our forefathers, are practically lost,” lamented parish priest Father Alfred Loguti. “We have to go back to our roots.”

According to traditional priest Lino Nawalaki, more transformative assistance from the peacekeeping mission will be needed to restore tranquil relations in the area.

“We believe the next step for us is for a ‘peace dialogue’ between the Kimotong communities and our neighbours, so we can resolve our differences.”