Displaced Cameroonians struggle in Nigeria (By Catherine Wachiaya in Ogoja) 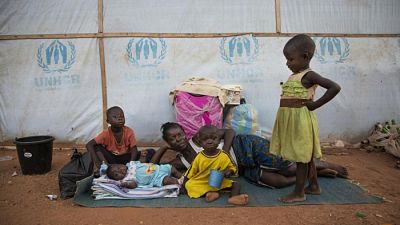 By Catherine Wachiaya in Ogoja

When armed men stormed into the remote village in south-west Cameroon, they took Agah Rachel’s husband, levelled a gun on him and pulled the trigger as she looked on.
As he fell to the ground, the 27-year-old widow knew she had to act fast. She took off with her sons into the surrounding bush with barely enough time to gather any personal belongings.

Frantic to get to safety, she hid out there for days, together with her elder brother and his family. They eventually made it across the border to neighbouring Nigeria.

“Every day and every night, I’m thinking. I’m thinking about the crisis in Cameroon, about my late husband,” says Agah.

Violent clashes between Cameroon’s military and armed separatists have displaced some 437,000 within the country’s borders and forced about 35,000 like Agah to seek safety in Nigeria. The displaced, the majority of whom are women and children, are mostly from English-speaking areas. They face great hardship in both countries.

Having fled with very little, their presence in already impoverished host communities is straining food resources and already limited health, education, water and sanitation facilities in these areas.

UNHCR has launched an urgent appeal to increase support for displaced Cameroonians who have survived nearly two years of ongoing violence. But of the US$184 million required for UNHCR’s operations in Cameroon and Nigeria – including US$35.4 million needed urgently for critical life-saving assistance to newly displaced Cameroonians – just four per cent has been raised.

Now living in Adagom refugee settlement, Rachel has found safety but is nagged by constant worry over her children’s future.

“For the nine months we have been here, my sons have not gone to school due to the poor school capacity,” she says. “I don’t have any means to cope, I have no source of income.”

Although UNHCR has added extensions to some schools to cater for more students, the numbers are still too high to accommodate them.

Like Rachel, Emmanuel Apusa barely escaped with his life after an attack on his community in Miyerem, close to the border with Nigeria.

“They came to our village and started shooting,” he recalls. “Right now as I speak, there are corpses rotting in the village there.”

He arrived in Nigeria after a grueling three-day trek through the bush, with some neighbours who also managed to escape.

The settlement hosting Emmanuel – one of three refugee sites hosting Cameroonian refugees – has doubled its capacity of 4,000 and currently hosts more than 7,000 refugees. The numbers have further increased as many refugees who previously lived in the host communities have relocated to the settlements since November.

“The situation is desperate,” says Josiah Flomo, the head of UNHCR’s sub office in Ogoja. Lack of funding is severely limiting our ability to adequately meet the people’s needs in almost all the sectors.”

Flomo adds that pressure on existing facilities including schools, health centers and water points is mounting and current resources are overstretched.

Many of the recent arrivals lack proper shelter. They are accommodated in large reception halls made of plastic sheeting, and even these are full to capacity.

“The situation is not easy for us,” says Emmanuel. “Look at the population here – we cannot sleep inside this hall, so we sleep outside.”

Rachel meanwhile lives in a borrowed tent. However, the conditions are far from ideal as she shares the medium-sized tent with ten people including her own children, her sister-in-law and her children.

“I put a piece of cloth on the ground for my kids and my brother’s kids to lie down,” she explains.

UNHCR is working closely with the Nigerian government to register all new arrivals and provide basic assistance. This includes the harder to reach refugee population living in the host communities in over 47 villages along the border, who make up over 60 per cent of the refugee population.

“Access to refugees in these areas is very challenging because of the time it takes to get there and poor road conditions during the rainy season,” Flomo explains.

To ease the strain on resources, UNHCR plans to put up new shelters for the arrivals and decongest Adagom settlement. Refugees are already being relocated from Adagom to another site, Okende. However, there are fears that – if the crisis in Cameroon continues – more people will become displaced over the coming months and, with the limited resources, UNHCR will not be able to meet their needs.

“As long as refugees keep arriving, we will need to take care of them,” adds Flomo. “But we need urgent support to help reduce this desperate situation.”

For most of the refugees, including Rachel and Emmanuel, the struggle to cope with life in exile will continue.

“I am suffering. We are suffering,” laments Rachel. “It’s not easy to leave your country to go and suffer in a different country.”

Download logo
An Anglophone refugee family from Cameroon wake up outdoors on a mat at the Agadom Refugee Settlement in Ogoja, Nigeria. © UNHCR/Will Swanson