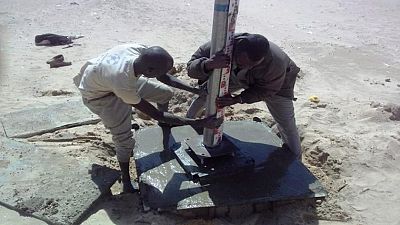 Mohamed Yahia Abakar, 42, has lived in West Darfur’s Abu Suruj all his life. The husband, and father of five daughters and eight sons is a descendant of farmers who followed in his family’s footsteps.

His village, established in the early 1950s, is home to about 10,050 residents mainly from the Fur, Tama, Bargo and Masalit ethnic groups. Like in many other parts of the greater Darfur region, Mohamed Yahia and other residents of Abu Suruj are dependent on rainfed agriculture and animal husbandry for food and income.

Much of the humanitarian response in the region has entailed extensive drilling of boreholes, as an emergency measure, often in concentrated locations but without coordinated hydrological and hydrogeological surveys.

The ongoing extraction volume, especially in areas of hard rocks and shallow aquifers, has negatively affected water resources by lowering the water table and drying up some shallower wells.

The work is part of an Integrated Water Resources Management Project in Darfur which is being implemented by UN Environment, the United Nations Children’s Fund, the International Organization for Migration and the World Health Organization, in partnership with Sudan’s Ministry of Water Resources and other Sudanese government agencies.

When the team of the Ministry of Water Resources, Irrigation and Electricity and the Groundwater and Wadis Directorate arrived in my village to install a rain gauge and evaporation pan, the community selected me to support the team since I had prior construction experience as mason. I was selected for on-the-job training and I have been regularly providing rainfall data to the directorate in Darfur and the community. The same rainfall data was compiled in a report sent to Khartoum for better future planning,” says Mohamed Yahia who was one of the 21 community members trained in 15 villages on how to operate rain gauges and to provide regular rainfall reports to the Groundwater and Wadis Directorate in Khartoum using his mobile phone from Darfur.

The joint project, which concluded in December 2018, was designed to support recovery and stabilization of Darfur’s war-affected populations, by providing them with access to safe drinking water, sanitation and hygiene practice and to ensure the sustainability of water resources in selected localities of the five Darfur states.

The project resulted in the establishment of a catchment management system using an evidence-based approach for holistic management of water resources with the support of the local community in remote areas. This was done through comprehensive assessment of water resources in four catchments, which identified potential areas for ground and surface water along with the current distribution of water sources and related issues,” says Atila Uras, UN Environment’s Sudan Country Programme Manager.

Since completing a major environmental assessment of Sudan in 2007, UN Environment has established an active presence in the country, working with Sudan’s national, state and local leaders, civil society and the international community to encourage the sustainable development of the country’s natural resources. UN Environment’s ultimate aim is to help the people of Sudan achieve peace, recovery and development in an environmentally sustainable way.

Climate change has also led to increasing interest in the effects of weather on the well-being of Darfurians.

One of the biggest challenges is limited rainfall data, especially in remote rural villages. Added to this, there is limited capacity in government institutions and engineers find it very challenging to spend the entire rainy season in rural areas to collect data and monitor rainfall.

In the past, I used to know when the rains were going to start, now I do not know. It is difficult to know whether it’s the beginning of the rainy season starts or just a one-off drizzle,” says Mohamed Yahia, who ekes out a living as a mason during the dry season.

Download logo
Many rural water supply structures have suffered from conflict destruction and a historic lack of maintenance. Photo by UN Environment