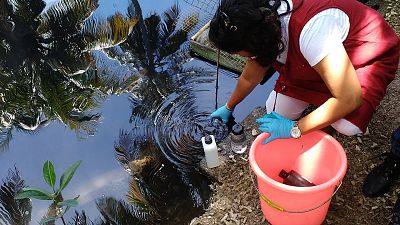 Agricultural activities, illegal sewage disposal and animal breeding could be among the sources of nitrogen pollution in urban waterways around Port Louis, the capital of Mauritius, according to preliminary findings of an IAEA-supported study using isotopic techniques. In excessive levels, some compounds of nitrogen, such as nitrate, can find their way into urban waterways and pose a danger to people and the environment.

“Nitrate pollution is a major concern in the country,” said Yannick Fanny, Scientific Officer at the National Environmental Laboratory in Port Louis, the largest city and economic centre of the island, with a population of around 200 000. “The study was a breakthrough, and preliminary findings show that nitrate contamination most probably originates from manure and septic wastes, as well as from dissolved organic matter in the soil.”

Nitrogen is a key fertilizer and has been widely used since the mid-1900s. When overapplied, it can make its way into rivers and groundwater through agricultural run-off, but also through sewage systems, animal feedlots and industrial activities.

Nitrate is a nitrogen compound and an essential nutrient for plants. In excessive quantities, nitrate poses a concern for public health, since it can impair the blood’s ability to transport oxygen around the body.
It can also cause algal blooms in lakes
and rivers, reducing biodiversity and the ability of aquatic ecosystems to support valuable services, such as tourism and commercial fishing.

In 2016, scientists began working with the IAEA to use isotopic techniques to assess the origin of nitrate pollution after authorities had detected nitrate contamination around Port Louis. Contaminants were found in streams and rivers, threatening protected areas, such as the Rivulet Terre Rouge Estuary Bird Sanctuary. Toxic algal blooms in the ocean caused episodes of fish kill, raising complaints among local fishermen.

The sources for such pollution could have been manifold: inappropriate wastewater disposal systems from households, faulty septic tanks, industrial discharges, animal breeding and agricultural activities. Knowing who or what is responsible for nitrate pollution can help policymakers take informed action to protect rivers
and groundwater.

Deciphering the origins of nitrates in waterways can be difficult. “Conventional chemistry will tell you how much nitrogen pollution there is in a river, but not where this pollution comes from,” said IAEA isotope hydrologist Ioannis Matiatos. “Analysing the isotopes of nitrate can give this kind
of information.”

With technical assistance, scientists from the National Environmental Laboratory collected chemical and isotopic data in fourteen river stations and fifteen water boreholes around the city, and identified mechanisms influencing water quality around the area. They sampled and analysed nitrogen compounds in Port Louis’ waterways with support of the IAEA’s technical cooperation programme in the form of expert visits, training and equipment. The method they used involved analysing the unique ‘fingerprints’ of nitrate in water molecules by looking at the molecules’ isotopic composition (read more about this on page 5).

The results of the IAEA technical cooperation project will form the basis of a comprehensive report with findings and recommendations not only for government officials, but also local communities. “Targeted courses of action by all concerned stakeholders can help to swiftly remedy or improve the situation in these urban settings,” Fanny said.

The cooperation also set the ball rolling for increased water monitoring activities throughout Mauritius. The scientists at the National Environmental Laboratory have begun mapping areas that contribute the most to nitrogen pollution in waterways and are collecting source material samples to create an inventory of isotopic signatures for identifying pollutants.

“In the future, when there are incidents, authorities can quickly match water samples with pollution sources and immediately know what kind of activity is probably responsible,” Matiatos said.