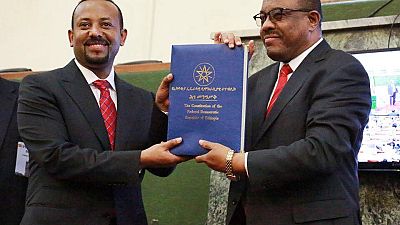 It has been a very good year for Prime Minister Abiy Ahmed who was elected to lead Ethiopia’s ruling coalition, the Ethiopian Peoples’ Revolutionary Democratic Front (EPRDF) following a long and widespread protest movement.

The then ruling party decided to accept a no-nonsense reappraisal wherein it admitted that it had made mistakes during its long tenure of office, offered a public apology and made an unflinching pledge to rectify mistakes and to usher in reform in order to broaden the political playing field, to ensure the flourishing of an unbridled press and to restore investment confidence.

Buoyed up by a prevailing feel-good factor and the support he received from the EPRDF, Prime Minister Abiy quenched the public’s thirst for reassurance concerning the stability of the Ethiopian state. In his inaugural speech, he told Parliament, in a unequivocal manner, “not to have any doubt about the sanctity of Ethiopian Unity”, and advised “against resting on past laurels but to instead redouble efforts to escape the divisive politics of the past by embracing his vision of “Medemer”– PM Abiy’s vision of unity and diversity.

The Prime Minister embarked on a series of reforms aimed at righting past wrongs and addressing the fault-lines of Ethiopian politics. After forming what he called a “reformist cabinet” – fifty percent of whom are women – he introduced a bill removing the Oromo Liberation Front and Ginbot 7 from Parliament’s List of Terror Organisations – two organisations which, until the emergence of Abiy Ahmed, were hell-bent on the violent overthrow of the EPRDF-led government.

Then followed an avalanche of reforms: release of all political prisoners, measures to ensure the independence of the judiciary, reform of the National Electoral Board (NEBE) headed by a former judge known for her critical stand against government interference in the judiciary, and the setting up of a Ministry of Peace, commissioned to ensure the maintenance of peace and the restoration of law and order.

But it is with a sceptical Ethiopian diaspora – which until then was a hot-bed of die-hard opposition to EPRDF – that Prime Minister Abiy managed to make formerly unthinkable inroads by assuring his Government’s commitment to maintaining the growth momentum and durable peace.

His rallies in Washington DC, Los Angeles and Frankfurt, not only succeeded in bringing together thousands of Ethiopians from various socio-political backgrounds, who had never imagined they would live to see themselves attending an EPRDF rally anywhere in the world but they fully embraced Abiy’s clarion call for “A Dollar A Day For Ethiopia” campaign.

Mindful of the fact that “the no peace, no war” status between Ethiopia and Eritrea was unsustainable, and a liability to both nations, Abiy made peace overtures that Asmara could ill afford to ignore, such as “Ethiopia will accept the Algiers Agreement”. The Prime Minister then flew to Asmara – previously unthinkable – where he was given a hero’s welcome with the Eritrean public showering him with praise and waving the Eritrean and Ethiopian flags.

Proximity talks leading to closer partnership are ongoing. The ripple effect of the rapprochement between Ethiopia and Eritrea, in turn, served as a catalyst for strategic partnership among the brotherly peoples of Djibouti, South Sudan, and Kenya.

As change without challenges is incomplete, so too were Abiy’s reforms without hiccups and challenges. The transformation ushered in by Abiy’s government across the length and breadth of Ethiopia continues to encounter challenges. However, the reforms and transformations are here to stay because ultimately, they reflect the will of the people.

Distributed by APO Group on behalf of Embassy of the Federal Democratic Republic of Ethiopia, London, UK.
Media files