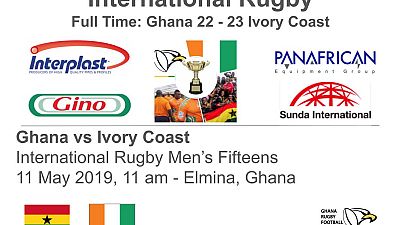 The national rugby team of the Ivory Coast, the Elephants, narrowly beat the Ghana Rugby Eagles by 23 – 22 in an exciting international rugby match staged at the Nduoum Sports Stadium in Elmina-Ghana on Saturday 11 May 2019.

The Ivory Coast, ranked number 43 by World Rugby, managed to clinch the match in the 75th minute with a drop goal that put them ahead of the 89th ranked Ghana Eagles by 15 – 23.

The Ghana Eagles fought back valiantly and managed to score a converted try in the last minute of the match that saw a final score of 22-23.

At halftime, the Ghana Eagles led the Ivorian Elephants 10 – 5. A total of four tries (one converted), two penalties and one drop-goal were scored in a closely contested battle.

Mr Herbert Mensah, President and Board Chairman of Ghana Rugby, congratulated the Ivory Coast on their win and said that he was looking forward to many more similar encounters in the future.

“The competition structure of Rugby Africa falls woefully short in giving developing nations such as Ghana the necessary match experience and we, the Presidents of West African rugby nations, have decided to embark on a regional competition framework that will fill this gap. This historic match was the first of many more matches to come to the Region,” Mensah said.

According to Mr Alain Koube, Director of the Ivorian Rugby Federation, the match was made possible thanks to the good understanding between the two Presidents, Mr Herbert Mensah and Dr Elvis Tano.

Koube continued to say, “The Ivory coast came back hard in the game. The more determined Ghanaians dominated the first half, logically leading the score. In the second half, the Ivorians used their experience to beat the young team of Ghana.”

He also advocated that this kind of friendly matches should be multiplied for the development of rugby in West Africa.

“Congratulations to Ghana Rugby for the perfect organisation of the match,” Koube said.

The national coach of the Ghana Eagles, Mr Lovemore “Dallas” Kuzorera, said that it was a good game in which the Ghana Eagles started on the front foot and kept the Ivory Coast on the back foot pretty much for the first 30 minutes of the match.

“We had four breaks that could have resulted in tries, but we couldn't convert the opportunities into points. We allowed the elephants to come back into the game and they scored three tries in the second half,” Kuzorera said.

Kuzorera also said that this was a new squad with five new caps and that lack of experience also played its part.

“When we were supposed to keep the ball we lost it in the last ten minutes of the game. Congratulations to the Ivory Coast and we look forward to our next encounter!”, Kuzorera said.

The next encounter for the Ghana Eagles is likely to be against Nigeria in the President’s Cup that was announced earlier in the year. Dates for these encounters are yet to be finalised.

The Ghana Eagles will also take part in four more Rugby Africa tournaments in 2019 that will include the women’s sevens and fifteens, the men’s sevens Olympic Qualifiers and a yet-to-be-announced Rugby Africa Nations Cup.