As Ebola cases spike, IRC’s David Miliband visits DRC: “The situation is far more dangerous than the statistic of 1000 deaths, itself the second largest in history, suggests” 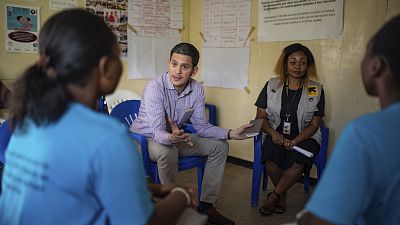 Over 1600 cases, over 1000 deaths have now been recorded;The April number alone (406 cases) would be the fourth largest outbreak in history; Ebola response needs major reset to earn trust of local people.

The ongoing Ebola outbreak in eastern Democratic Republic of Congo (DRC) has killed 1,074 people. In total 1,604 have been infected with the disease. International Rescue Committee (IRC) teams believe that the numbers are rising and the outbreak is not yet under control. Recent violence that has targeted Ebola-related facilities – including three IRC triages at health centers which were recently burned down – has once again led to the halt in certain programming, further hampering efforts to quash this outbreak. More than nine months into the crisis it is time for a reset.

The IRC’s President and CEO, David Miliband, has been in Goma meeting teams combating the disease. Travel to Katwa and Butembo was impossible due to the ongoing insecurity, which has forced IRC staff to significantly scale down work in the area.

David Miliband, IRC’s President and CEO said: “This Ebola outbreak, taking place in an area of active conflict with widespread poverty and deep political divisions, is an unprecedented challenge for the government and people of DRC, and for the international community. The situation is far more dangerous than the statistic of 1000 deaths, itself the second largest in history, suggests, and the suspension of key services threatens to create a lethal inflection point in the trajectory of the disease. The danger is that the number of cases spirals out of control, despite a proven vaccine and treatment.

“I travelled to Goma, in eastern DRC to meet and thank the brave colleagues and communities working to overcome the outbreak that IRC teams have now been responding to for more than nine months. IRC teams warned the situation in North Kivu is increasingly volatile and this is making progress against the disease impossible. Now is the time for a reset in this response.

“The recent series of targeted and alarming attacks has left the safety of our staff in Butembo in question, and forced us to significantly scale down our work in the area. This disruption in programming is the longest yet and our teams are concerned that this will lead to a surge in the number of cases. Interruptions in the vaccination and other vital activities mean that cases are less likely to be detected, isolated and treated early, which is critical to saving their lives, and to identifying and tracing contacts who need to be given the vaccine. The vaccine has not only been shown to be 97.5% effective against Ebola but it also appears to significantly reduce the severity of Ebola disease. It's vital that this work continues to stop this outbreak and save lives.

“I’ve been speaking to doctors who warn that this outbreak could last for another year. For the people of Congo, who already have endured decades of violence and crisis, and beaten back other outbreaks of Ebola, this outbreak is the last thing they need.

“We also know that this outbreak is impacting women more than men. 55% of cases are female – women and girls tell our staff that they are at increased risk as they are the primary caretakers of the sick. Moreover, women and girls are at greater risk of violence due to the increased stress in households and because they are required to more frequently collect water – a journey that puts them at risk of being attacked.

“We look forward to discussing with all those involved in the Ebola response the necessary steps to achieve greater trust, coordination and impact. We know affected communities are key to the success of the response, and their trust needs to be earned. The international system needs each part of the response – UN, donors, NGOs – to play to their strengths. In addition, coordination of activities and sharing of information needs to be upgraded. Experience from other crises tells us that surveillance needs to be locally led, and the lessons of other outbreaks about the mobilization of communities brought center stage. Security needs to be built from the bottom up, community by community.”

Leading on infection prevention and control, the IRC has been working in 59 health clinics in the Butembo, Beni and Goma areas, training health workers to recognize symptoms and safely triage and transfer suspected Ebola patients to treatment centers; as well as working in women’s and children’s protection and community prevention and outreach. Whilst much of this work has been suspended in the Butembo area, IRC continues to support several hundred staff from the Ministry of Health who work at triage posts, and is providing the delivery of vital supplies, including kits to keep health workers safe.

With more than 13 million people in need of aid, DRC is one of the world’s most complex, chronic and long-standing humanitarian crises. The IRC has been working in the Democratic Republic of Congo since 1996 responding to the humanitarian crisis in the east. It has since evolved into one of the largest providers of humanitarian assistance and post-conflict development, with life-saving programming in health, economic recovery, women’s and children protection, and livelihoods, including more than three years working on health and women’s protection issues in the Beni and Butembo areas where we continue to support the community with work beyond the Ebola response.

Download logo
IRC’s CEO and President David Miliband speaks to young women Congolese women who advocate for family planning and raise awareness about contraception in their communitywith support from the IRC.