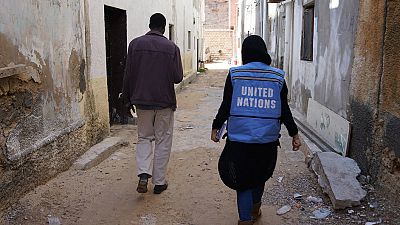 An attack on an ambulance in Tripoli on Wednesday that has critically injured the head of emergency services in Libya’s war-torn capital, along with two paramedics, has been strongly condemned by UN humanitarians.

Health workers and civilians have not been spared in heavy clashes that erupted in early April between the internationally recognized Government and eastern forces loyal to commander Khalifa Haftar’s self-styled Libyan National Army, marking the latest episode in spiralling violence that followed the overthrow of President Muammar Gaddafi in 2011.

As the conflict continues into its second month, more than 400 people have died and some 2,000 have been wounded, in addition to the thousands of displaced civilians, according to the World Health Organization (WHO).

The “direct attack of a marked ambulance seriously injuring three health workers is absolutely abhorrent and should not be tolerated,” said UN Humanitarian Coordinator for Libya, Maria Ribeiro. “Those who ordered and carried out this attack must take legal and moral responsibility for this heinous act”, she insisted.

Echoing her comments, the WHO described the attack “on an ambulance with visible logos” as a “shocking and intolerable violation of international humanitarian law”.

“Not only did this attack injure key personnel, but the ambulance itself was taken away, thereby depriving patients of future care”, said Dr Syed Jaffar Hussain, WHO Representative in Libya.

Since conflict in the oil-rich North African nation escalated last month, 11 other ambulances have been either “impacted” or suffered “collateral damage”, according to the UN health agency.

In April, three medical workers were killed in Tripoli, and numerous first-line responders have struggled to reach the wounded without being hurt themselves, WHO said in a statement.

“This flagrant breach of the basic rules of warfare could jeopardize the operations of field hospitals and ambulance teams and deter dedicated health staff from performing their life-saving duties,” said Dr Ahmed Al-Mandhari, WHO’s Regional Director for the Eastern Mediterranean. “WHO cannot accept any actions that put health workers in harm’s way. Health staff in Libya are working to save lives and must be allowed to work without additional risk to their safety or well-being.”

Since the beginning of the Tripoli clashes, WHO has been supporting field hospitals and field ambulance teams, providing medical supplies that include trauma kits with medicines for war injuries.

It has also deployed emergency medical teams to key referral hospitals to perform surgery in and around Tripoli.