Vaccines are saving millions of lives of children in Somalia: urgent need to scale up routine immunization programme 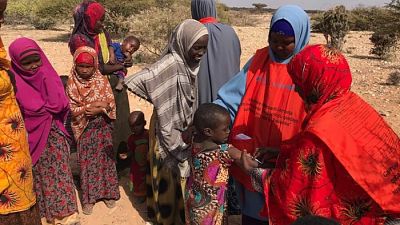 From the moment we’re born, we’re all at risk of contracting diseases. So the question is, are we aware enough? Are we responsible enough? Are we immune enough? Not long ago infections like influenza, tetanus, chickenpox and measles were prolonged, painful illnesses, which often resulted in death. Immunization saves millions of lives every year and is widely recognized as one of the world’s most successful and cost-effective public health interventions.

The Expanded Programmme on Immunization (EPI) started in Somalia in 1978 with the support of WHO and UNICEF. Due to the prolonged conflict and instability Somalia’s health system, including immunization services, is very weak, fragmented and severely under-funded. Control of vaccine-preventable diseases remains a huge challenge in Somalia, due to the low routine immunization coverage and the continued inability to reach children in security-compromised areas, hard-to-reach areas, nomadic children and competing health priorities for parents other than immunization of children. Low routine immunization coverage and a history of serious outbreaks that have hit Somalia in the past are a strong reminder of the risks posed by large cohort of un-immunized children. Vaccine-preventable diseases are prevalent in Somalia and child mortality is 137 per 1000 live births.

Somalia has been providing the traditional 6 antigens in routine immunization and with the support of GAVI – the Vaccine Alliance and immunization partners like UNICEF and WHO. The country has introduced pentavalent vaccine in 2013 and inactivated polio virus vaccine in 2015 and plans to introduce measles-containing-vaccine second-dose (MCV2) in 2020. With the continuous support of GAVI, Centers for Disease Control and Prevention, Atlanta, Bill & Melinda Gates Foundation and Rotary International and other important donors immunization coverage has improved in recent years; however, Somalia has still not attained the desired levels of coverage.

To improve immunization coverage more efforts needs to be in place for integrated approach along with other programmes like nutrition, malaria, water and sanitation and communication programmes to complement the reach of immunization and improve coverage of all eligible children with equity.

Somalia faced a deadly measles outbreak in 2017; out of the 31 000 people affected, 83% were children under the age of 10. WHO Somalia’s Emergency Response team, Somali national authorities, and partners targeted 4.7 million children in the nationwide measles campaign. During this intervention, around 4.5 million children were vaccinated. As a result of the nationwide immunization campaign conducted, as of April 2019, Somalia witnessed a decline in the trend of cases reported this year. This steady progress can be attributed to partners’ commitment to strengthen routine immunization and to reach out to unvaccinated children to boost their immunity. However, Somalia’s children are still not out of danger – measles outbreaks are likely to spread in security-compromised inaccessible areas.

Somalia’s last outbreak of wild poliovirus, which occurred from 2013 to 2014, affected 194 children. Since then, as a result of mass and more focused immunization campaigns, and robust surveillance for polio symptoms to guide immunization activities, the country has been free of wild poliovirus. However, due to the challenges faced in reaching hard-to-reach areas, the country is currently experiencing 2 outbreaks of rare strains of the poliovirus, which have affected 13 children so far. The last nationwide polio campaign, conducted in March, vaccinated more than 2.7 million children under 5. More than 84 000 children were vaccinated for the first time.

Marked during the last week of April, World Immunization Week aims to promote the use of vaccines to protect people of all ages against disease. WHO wants to assure parents and communities in Somalia that vaccines are safe, effective, and can lead to lifetime immunity from diseases.

While celebrating World Immunization Week with the theme “Protected Together: Vaccines Work”, Dr Mamunur Rahman Malik, WHO Representative for Somalia, called for scaling up the routine immunization programme in Somalia through working together with partners, communities and grass-root level organization. In 2018, Somali authorities, WHO and partners vaccinated more than 400 000 children against measles as part of routine immunization programme. Yet, about 170 000 children were missed or did not receive the first dose of measles vaccine last year. “Our priority is to reach out to all these children who misses the routine vaccine doses or remain unvaccinated owing to access or any other barrier. Leaving no child behind, we can ensure every child’s right to lead a healthy and productive life- if all who need to vaccinated are vaccinated in a timely way,” he stated.

In the last decade, Somali health authorities and WHO worked with Gavi and other key partners to strengthen routine immunization. This protected 2.4m children against 8 vaccine-preventable childhood diseases.

Somalia has shown remarkable progress in achieving good immunization coverage for some diseases that is realistically feasible to achieve in a fragile state, lot of works still need to be continued and scaled up to fill the immunization gaps through enhancing partnerships with other local stakeholders which is the key theme of this year’s World Immunization Week. Responding to outbreaks of measles or polio is a priority but can be prevented through achieving high coverage in routine immunization programme and also by reaching out to the children who do not receive any vaccine during the first year of their life.

Despite the gains made by vaccination over the years, there are still unvaccinated and under-vaccinated children in Somalia today. As a consequence, millions of children are being put at risk against vaccine-preventable diseases. As part of this year’s campaign, grass-root level vaccinators who spearhead all barriers to reach every child in inaccessible areas of the country were honoured as immunization heroes. Their roles in keeping children healthy and securing a safer future has been acknowledged throughout the country.

Download logo
Vaccines are saving millions of lives of children in Somalia: urgent need to scale up routine immunization programme