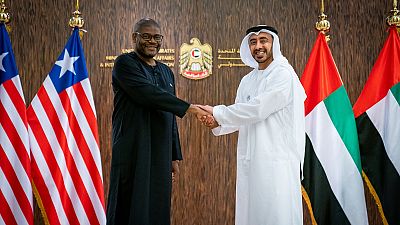 During their meeting, which was held at the Ministry of Foreign Affairs and International Cooperation in Abu Dhabi, both sides discussed how to strengthen cooperation between the UAE and Liberia, and exchanged their opinions on regional and international issues of common interest, including the crises in Yemen and Libya.

Sheikh Abdullah welcomed Findley’s visit while highlighting the close relations between their countries, as well as their keenness to enhance their overall cooperation.

Findley praised the UAE’s leading regional and international stature while noting that his country aims to improve its ties with the UAE.

After the meeting, Sheikh Abdullah and Findley signed an agreement related to avoiding double taxation, as well as a bilateral investment agreement.