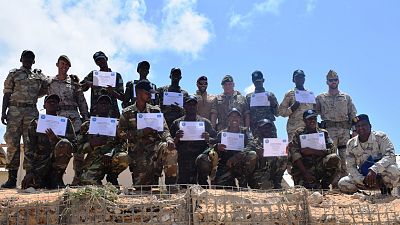 The 6th Train-the-Trainers course to be delivered by the European Union Training Mission Somalia (EUTM-S) ended on 30 April and was marked with a closing ceremony at General Daghadaban Training Centre (GDTC) in Mogadishu. After 14 weeks of challenging training, 12 new Somali National Army (SNA) instructors qualified and now stand ready to deliver basic military training to other SNA troops.

The aim of the EUTM-S Train-the-Trainers course is to build a cadre of SNA instructors who will be able to gradually create a self-sustaining, independent and indigenous training capability in the SNA. The course includes modules covering leadership, military tactics, crowd control, instructional techniques and human rights.

EUTM-S was established in 2010 and works in partnership with the SNA and the Ministry of Defence to build the capacity of Somali defence institutions, using a ‘Three Pillar Approach’ of Training, Advising and Mentoring.