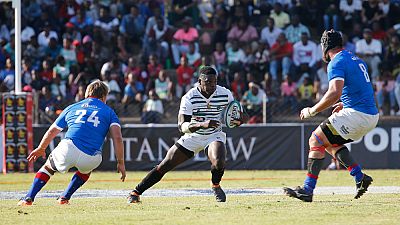 Zimbabwe Rugby Academy has named Brendan Mandivenga as the team’s captain ahead of their inaugural stint in the SuperSport Rugby Challenge in South Africa.

Mandivenga has since High School been one of Zimbabwe’s gems as a prolific backline player at fly-half, centre and full-back.

Speaking from the team’s camp base in Cape Town, Mandivenga says they are ready to take on the daunting task ahead.

“It is a massive honour for us to be playing in this competition, it is a great opportunity for us to showcase what Zimbabwe rugby is all about and we have an opportunity to put Zimbabwe back on the map. As a team we will make sure we will grab it with both hands and give it our everything.”

“We are not really looking at these opponents as our superiors rather we are looking at each team as the same as us – as a process as we are trying to build for the next world cup and it all starts in this competition.

“We are laying out our foundation for the next four years as our goal and we will take on each team as they come,” said Mandivenga.

While in Cape Town the team partnered with South African sports brands and nutrition supplier, Bodworths Brands who will the supplying the squad with a mix between extreme nutrition, proteins and carbohydrates supplements among a plethora of products.

Courtesy of the new deal, the team will have a carefully selected set of different brands of sports nutrition supplements to achieve the mammoth task of competing in this year’s SuperSport Rugby Challenge.

Brad Bodsworth the owner of Bodsworth Brands says his ardent love for sport and the passion displayed by the Zimbabwe Rugby Academy makes it worth supporting the team.

“I am an avid sports lover and rugby players with passion such as the underdogs have always been something that I have been a firm support of. When it comes to Zimbabwe Rugby Academy, these guys a literally laying it all on the line for their passion, the love they have for their rugby and their country.

“There is no other added incentive for them other than the passion that there are playing the sport and that is what I am a firm supporter,” said Bodworth.

In addition to the nutrition sponsor, the team is working with strength and conditioning expert Nico van Der Walt at Crossfit False Bay as the driving force behind forging the Zimbabwe Rugby Academy into the level of conditioning required for the SuperSport Rugby Challenge.

An additional fixture has been added to the team’s itinerary as the team is scheduled to face the Border Bulldogs on Sunday (28 April) in East London.

The SuperSport Rugby Challenge kicks off on Friday (26 April)