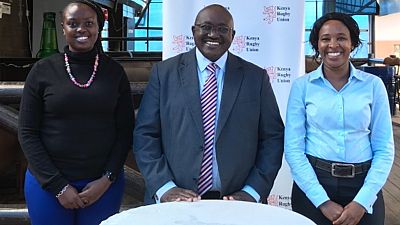 The Kenya Rugby Union (www.KRU.co.ke) has co-opted two women – Wangui Kibe and Peris Mukoko, into the Board of Directors with immediate effect.

“We are keen to have a Board that reflects the spirit of rugby as a sport for all: men, women, boys and girls. The two ladies have, through the quality of their Rugby contribution, and enduring commitment proven that they will add value to the governance of the sport. It’s a one-year co-option.

Kui (Wangui), for instance, has been involved in the management of most of the Safari 7s tournaments since inception in 1996, 23 years later. Peris was the first woman World Rugby Match Officials’ Educator and is a former Kenya international”

Therefore, the two ladies have not been co-opted to the Board merely because they are women. They are strong Rugby persons in their own rights with achievements over the years. We look forward to their very meaningful contribution to the sport ” said Oduor Gangla, the KRU chairman

The chairman added that there was room yet to co-opt people in the various Board committees. For instance, former Kenya Lioness international forward, Angela Olum, has been co-opted to the Women Rugby Committee.

Kui, in addition to the involvement in the first Safari 7s, managed the KRU office when it was initially set up, handling fixtures, referees, media and national teams for a period of 2 years. She was the first Kenyan woman to attain the KRU Rugby Level 1 Coaching Award.

She has a business degree from Daystar University, as well as a Diploma in Professional Marketing from the Chartered Institute of Marketing.

Kui is currently employed at Safaricom in enterprise digital marketing. She joined Safaricom in 2010 to manage sponsorships, and worked closely with KRU during the Safaricom 7s. Other sporting associations she handled include Athletics Kenya and Kenya Lawn Tennis Association.

She has served as chairperson of Ungana (The Young Friends of AMREF), a non-profit organization. Ungana is a Kenyan youth volunteer and empowerment organization, under the auspices of AMREF – Africa’s largest health NGO.

Peris, beyond being the first Kenyan female World Rugby Match Officials’ Educator and former test player, is an accredited member of the Kenya Rugby Referees Association (KRRA). She began playing at St. Mary’s School before joining Kenya Harlequin and then moving to Stanbic Mwamba.

She has various Rugby technical qualifications in her in-depth involvement of over a decade.

Peris has been a government officer, for the last 5 years. She also has had some experience at ICON Sports Marketing. There, she handled premier sports events such as the Barclays Kenya Open and “Road to Anfield” competition. The latter was a partnership between Liverpool FC and Standard Chartered Bank.

Peris is a graduate of Catholic University of Eastern Africa where she was a founder member of the Catholic Monks RFC. She is currently pursuing an MBA in Strategic Management at the University of Nairobi.