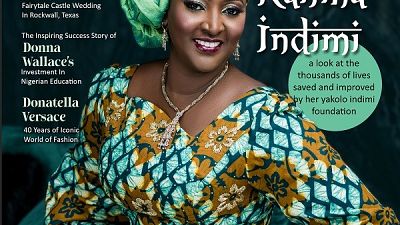 This edition of the Pan-African Entrepreneurial and Luxury magazine, Pleasures Magazine, is dedicated to celebrating Rahma Indimi who is fighting poverty and inequality through the effortlessness of highly skilled volunteers and collaborative partnerships through her NGO, Yakolo Indimi Foundation, by empowering women and youths through education, skill acquisition, micro enterprises, farming, enforcement of their human rights, financial aid and psycho-social interventions.

Speaking with Pleasures Magazine, Rahma Indimi who is driven by an unwavering passion and determination to support the less privilege gave an insight into how she is giving succour and saving the lives of thousands of internally displaced persons (IDPs) in the North-East via her foundation, aptly titled; Rahma Indimi: A Look at The Thousands of Lives saved and improved by her Yakolo Indimi Foundation.

On the making of the NGO, Yakolo Indimi Foundation, Rahma said

“I grew up watching the generosity of my father, Dr. Muhammadu Indimi, OFR. He is always trying to solve problems for people. He speaks often about poverty and how it can be diminished. He instilled in us the awareness of heartbreaking issues in society. Like every parent, he worked hard to make his family comfortable. But he taught us to adapt to different situations. So, the idea of the Yakolo Indimi Foundation was born from lessons shared by my father. I saw the smiles on the faces of those helped by my daddy. I wanted to be like him, helping people. Before Yakolo Indimi Foundation was created, my team and I had been investing in humanitarian activities. Empowering people is one of my greatest motivations. It brings immense happiness and peace in my heart.

“Presently, the impact of the insurgency in the North-East is overwhelming, particularly in Borno and Adamawa. The people need all the help they can get. Although the IDPs are in other states, the conditions in the North-East are dire. To make things worse, insecurity cuts off access to many parts of Borno and that makes it impossible to save thousands of children and families. In spite of the long distance, my team and I do not hesitate to go home again and again to help our people. For example, the Muhammadu Indimi Foundation created by my father developed homes for 100 households. The Yakolo Indimi Foundation reached out to the women and gave them sustainable means of earning revenue. Several IDPs have been given sewing machines and flour processing machines. They also received training as well as start-up finances. Little by little, all IDPs will be empowered. That is the vision. Periodically, the Foundation visits to conduct surveys on the needs of IDPs, in collaboration with the office on Sustainable Development Goals, SDGs, in the North-East. Additionally, the Yakolo Indimi Foundation recently started a food security project. We equip beneficiaries with modern farming skills and provide an environment to do so. Livelihood is restored when they can sell produce and keep their families nourished.”

The Foundation collaborates with a medical team during its outreach. We support the team with medicine. The recent trend of increased pregnancies in the IDP camps was a concern. You could easily come across a woman with 20 children and you would see children roaming the streets. So, the Foundation sensitized the women on birth control. It was successful because some of the women showed interest. The health challenges in the North-East are overwhelming, but not insurmountable. We believe partnership would increase and accelerate impact.

This issue also includes a special feature to celebrate Versace’s 40th anniversary of Iconic world of class and to celebrates this milestone, the magazine had an exclusive interview with the brand’s Vice President and its founder’s little sister, Donatella Versace who joined the company in the creative department in 1988 and there began her distinctive commitment and influence on the brand. Following the tragic murder of Gianni in 1997 in Miami, Donatella has shown redoubtable strength of character and has managed the company up to the present day.

Plus, Donna Wallace, a Jamaican-Briton and proprietress of Oxford Manor College, Abuja who sold her London home to investment in Nigerian Education. Wallace in this interview with Pleasures Magazine shared her start-up experience and why Nigerians being one of the most intelligent races in the world don’t need to pack their bags and pay millions of Naira abroad to get their children educated.

And as usual, the magazine is incomplete without your usual light stories and other human interest narratives. Read the interesting tourist sites in Kenya, these and many more reports combine in making the magazine a collector’s item and reading pleasure for all and sundry.

Distributed by APO Group on behalf of Pleasures Magazine.