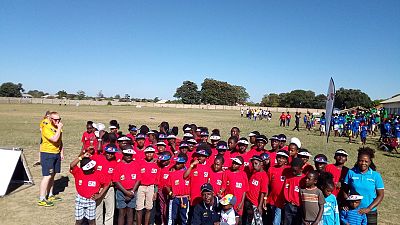 After an entire week of training and Coach Education both in the mornings and afternoons in Kabwe, Zambia, the BHUBESI PRIDE FOUNDATION tour has finally come to a close with Sables Orphanage Centre lifting the 1st place trophy, DieHardRugby Academy took 2nr place while Robert Shitima School took 3rd place in five (5) team tournament.

The Bhubesi Pride who started their week working alongside Buddy Coaches from the DieHardRugby Academy & selected Teachers in the former Broken Hill mining town, has concluded their tour with a resounding success at a tournament held on Friday 26th April, June 2019 at Mine Secondary School near Makululu Township in Kabwe, Zambia.

The games which attracted 250 girls and boys, 18 associate/trainee coaches and 11 Teachers plus representatives of the participating teams, was officially opened by the Permanent Secretary of Central Province Mr Chomba, who was represented by the Provincial Sports Coordinator Mr Banda.

Speaking when he handed over the trophies to the winners, the Guest of Honor reminded the young participants that sport has always been a unifying force as it builds and forges/cements relationship, friendships and networks. He said “ Regardless of who ever lifts the trophy, all of you are winners because you have made it this far. I'm sure some of you would have been elsewhere doing unmentionable vices but sport has brought us together for a common good”. He further applauded G4S for extending their Corporate Social Responsibility to young girls and boys. “The future of your company and the country at large is in the hands of these participants. We all acknowledge that a healthy Nation is a wealthy Nation and it starts with all of us gathered here”.