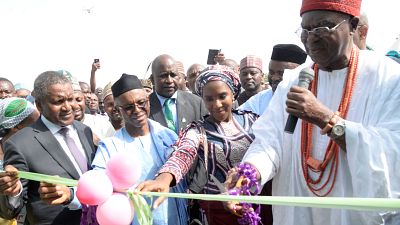 Africa’s foremost businessman and Chairman of Aliko Dangote Foundation (https://Dangote.com), Alhaji Aliko Dangote has made yet another critical intervention in the educational sector when he donated fully equipped 2,160 bed space hostel complex to the Ahmadu Bello University, Zaria at the weekend.

The students’ halls of residence comprising of 10 blocks of 360 rooms built at a colossal sum of N1.2billion is coming after similar gestures to Bayero University, Kano and University of Ibadan, where the business mogul donated multi-billion Naira business school complexes respectively as part of his contribution to the educational development in the country.

The new students hall of residence was commissioned to commemorate the 41st convocation of the University during which the university authorities reciprocated the act of philanthropy by conferring on him and the renowned labour leader, Hassan Sumonu, honourary Doctorate Degree. Also 15,787 graduating students were also awarded various degrees.

The President of Dangote Group on the occasion explained that he was moved to build the structure having realized that the student population at the universities have recorded significant increase without a corresponding growth in terms of infrastructure lamenting that the situation has remained a subsisting and growing major challenge as Nigerian public universities continue to grapple with under funding.

“Thus, I will like to use this opportunity to enjoin the Federal Government to consider allocating special funds to the universities to enable them to improve on research and upgrade their infrastructure. Such special intervention has become imperative given the perennial funding challenges facing our universities”, he stated.

Dangote posited that the Federal Government alone could not shoulder the entire burden of funding tertiary education due to competing needs of other sectors that also demand priority attention. This is where Public Private Partnership (PPP) can and should come in to fill the gap.

He then enjoined the private sector to adopt a new approach towards supporting the federal government in tackling the funding deficit in the higher institutions of learning.

Said he: “I strongly believe the private sector must go beyond just the payment of the 2% Education levy and be ready to join hands with the State and Federal Governments in expanded funding for tertiary education in Nigeria. This will ensure that our institutions of higher learning are positioned to produce graduates who can transform this nation.

“If there are two things that I am passionate about, they are education and entrepreneurship. I believe they go hand in hand. Some years ago, as Chairman of the National Committee on Job Creation, my committee strived to fashion out strategies for integrating entrepreneurship into our national educational curriculum, in line with what obtains in the Western world.

While expressing his gratitude on the award conferred on him, Alhaji Dangote described ABU as “an institution famed for its incredibly thorough academic tradition, the quality of faculty, and the enriching experiences of life within its walls. Today, the university has lived to its billing as a melting pot for ideologies by honouring a renowned socialist and champion of employees’ rights, Alhaji Hassan Sunmonu and Myself, for being a leading capitalist and investor in employment generating enterprises.”

Dangote noted that “It is also with a deep sense of fulfilment that today’s occasion is also being used for the commissioning of 10 blocks of student hostels which consists of 360 fully equipped rooms with capacity for housing 2160 students, built at a cost of N1.2 billion donated by the Aliko Dangote Foundation to Ahmadu Bello University, (ABU) Zaria.

“Our intervention is designed to lessen the plight of students who suffer acute accommodation challenges within the campus. We have brought similar intervention to University of Ibadan (UI) and Bayero University Kano (BUK) amongst other institutions”, Alhaji Dangote stated.

While commending him, Governor Nasiru El-Rufai of Kaduna State who officially opened the hostel said Mr. Dangote’s philanthropic spirit should be emulated by others who have been blessed by God.

A visibly elated Governor, who is an alumnus of the University, said both government and the private sector can partner to lift the educational sector in Nigeria pointing out that if not for the efforts of the university management, the institution was already dying.

The Vice Chancellor, Professor Ibrahim Garba who was very excited at the magnitude of the structures said the University is the largest in West Africa and described the Aliko Dangote hostel project as a “big relief,” saying lack of adequate accommodation is one of the nightmares of the university.

He told the audience that Alhaji Dangote’s kindheartedness to the university was is immeasurable, saying of the 50,000 students of the university, the institution could hardly accommodate 10,000 and that the new hostel was the first addition after 40 years to the hostels built by the university.

While commending the Aliko Dangote Foundation, Director Physical Planning and Municipal Services of the University, Engineer Muhammad Aminu Sambo, said: “This is a big relief because the university has limited accommodation in relation to the numbers of students admitted every year. This is one of our nightmares.”

He commended the Chairman of Aliko Dangote Foundation and urged all able Nigerians to emulate him and intervene in the educational sector.

National President of the Ahmadu Bello University Alumni Association Professor Ahmed Tijani Mora had recently noted that the contribution of the Aliko Dangote Foundation to the educational sector and more importantly to the school was unprecedented. He said it was in this regards that the University Alumni Association recently conferred a Corporate Award on Aliko Dangote.

It would be recalled that Alhaji Dangote through his Foundation had only recently donated a World Class Dangote Business School worth N1.2bn to the Bayero University Kano, and built another one in University of Ibadan worth N250M. he also donated N200 million to Katsina State University.

Expressing the motive behind his educational intervention across the nation, Alhaji Dangote had said: “I do not only want to be known as the Africa’s Richest Man, but the biggest philanthropist. I will continue to use my resources and my voice to help shape a better Nigeria, and Africa as a whole.”