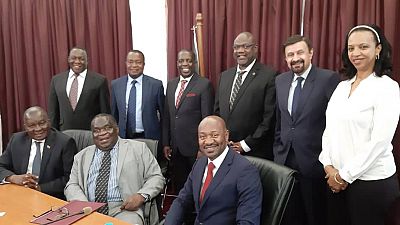 Malawi’s recovery and reconstruction plans in the aftermath of Cyclone Idai has received a boost from the African Development Bank (www.AfDB.org), which is supporting the country with an emergency relief package and measures to combat the effect of climate change in the Southern African region.

Mateus Magala, the Bank’s Vice President for Corporate Services and Human Resources, led a delegation to Lilongwe this week, to discuss the institution’s intervention plans with public and civil society officials in Malawi.

“We have come to express our support to Malawi and to partner with the Government of Malawi in its ongoing efforts to provide immediate relief and reconstruction in affected sections of the country,” he said.

Magala informed officials that the development finance institution had set up an Emergency Recovery Fund, which will disburse US$100 million to jumpstart reconstruction efforts in Malawi, Mozambique and Zimbabwe. The Bank is also planning to redirect funding, totaling $1.4 million, to the immediate relief effort, reallocated from savings and extensions of ongoing Bank projects in Malawi’s water, roads and agriculture sectors.

Responding to Magala, a visibly elated Gondwe said, “The African Development Bank couldn’t have come at a better time, to join us in our efforts which are now focused mainly on providing humanitarian relief and reconstruction…We were looking forward to bumper harvests in Malawi this year, but we have lost our entire crop to the cyclone.”

The Bank has already availed $250,0000 to Malawi, from its Emergency Relief Fund, for the purchase of emergency food items to avert hunger following the loss of crops damaged by the severe floods. Gondwe acknowledged receipt of this fund during his meeting with the Bank delegation.

The Bank’s Climate Fund will also release $150,000.00 to Malawi to enable authorities to assist communities and internally displaced persons impacted by the cyclone. The Bank’s long-term plans include designing and developing mechanisms for climate insurance and mitigating climate change.

Close to sixty people have died, and about 1 million persons across 15 districts have been displaced by the severe floods, mostly in the south of the country, where entire villages were submerged in water. Private sector activities and operators in the land-locked nation of about 18 million people were also severely impaired by the cyclone.

“Now is the time to talk about long-term and permanent solutions to the problems of floods in Malawi. We need to build houses and new structures but, above all, we ought to take advantage of this calamity to accelerate our irrigation development systems,” Gondwe remarked.

Cyclone Idai hit Malawi, Mozambique and Zimbabwe in mid-March 2019. Hardest hit was Mozambique, where the cyclone killed about 600 people. More than 1,600 people were injured, according to the UNHCR, the UN refugee agency. Malawi’s Homeland Security Minister Dausi estimates that about $365 million will be needed immediately for the reconstruction of bridges, schools, hospitals and homes.