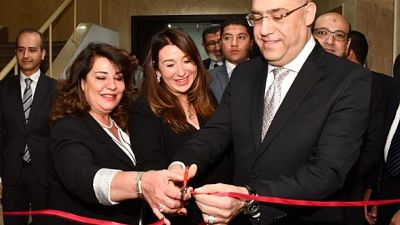 UN-Habitat Regional Office for Arab States (ROAS), established in 2011, and generously hosted by the Arabic Republic of Egypt, has a mandate to provide policy advice, technical cooperation and capacity building for eighteen countries across the Arab region as well as providing tools and support for regional mechanisms to coordinate cooperation in the fields of urban development and housing in the Arab region.

Since its inception, the regional office of the Arab States has grown exponentially with programs spanning across the four Domains of Change of UN-Habitat: Reducing Poverty and Spatial Inequality; Enhanced Shared Prosperity; Strengthening Climate Action and Improving the Urban Environment; and Urban Crisis Prevention and Response, thanks to the generous support of partners.

During the opening, Dr. Assem Al-Jazzar expressed his appreciation for the partnership between the Egyptian government and the United Nations Human Settlements Program where the government of Egypt has been supporting UN-Habitat since the United Nations Conference on Housing and Sustainable Urban Development (Habitat III) in Quito, Ecuador, October 2016. Egypt, along with all other United Nations Member states, endorsed the New Urban Agenda and committed to work together towards a paradigm shift in the way we plan, build, and manage our cities; and reinforce the role of UN-Habitat in leading the way towards a sustainable urban environment for all, leaving no one and no place behind.

Ms. Zena Ali Ahmed, Regional Director for Arab States, expressed her appreciation for the generous support provided by the Government of Egypt to the United Nations Human Settlements Program and stated” We are truly grateful to the Arab republic of Egypt for hosting the Regional Office for Arab States since 2011, and to the government of Egypt for availing all support to UN-Habitat to achieve a better quality of life in urban areas and improve living conditions to all. We look forward to continuing our partnership with Egypt to support the region in their quest for achieving the Sustainable Development Goals”

Ms. Rania Hedaya, director of Egypt country programme, stated that” For over 10 years, UN-Habitat in Egypt has been able to build strong partnerships with the government, civil society, donors, and various stakeholders, while pushing forward its vision of piloting new planning approaches and technologies that can support a more sustainable urbanization process”.

In Egypt, with a high population growth rate (approximately 2%) and current population of  100 million, 43% of which live in urban areas and is expected to reach over 60% by the year 2050, it is imperative that Egypt further equip itself to face the challenges of urbanization and manage it in an efficient manner to maximize and capture the  values created, optimizing the returns on investment, from the social and economic perspectives.

Ms. Rania added “We commend Egypt for prioritizing investments in the urban sector since urbanization, if managed well, could be the driver for sustainable development. And we are very happy that UN-Habitat has been given the opportunity to support Egypt in its sustainable urbanization process on both the policy and implementation levels, with a people-centered focus.”