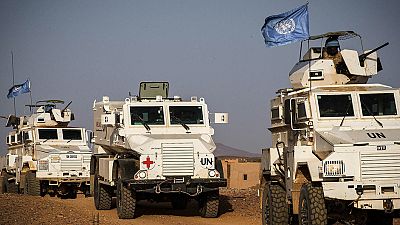 An improvised roadside mine which exploded hitting a UN peacekeeping convoy in Mali, killing one ‘blue helmet’ from Egypt, and wounding four others, may constitute a war crime, the UN Chief said on Saturday, as senior UN officials condemned the blast.

Secretary-General António Guterres issued a statement on Saturday night in New York, giving details of the deadly bombing, which took place against a convoy of vehicles in central Mali, close to the border with Burkina Faso, belonging to the UN Mission, MINUSMA. The vehicles were en route between Douentza and Boni, in the Mopti region.

“MINUSMA peacekeepers responded, killing an assailant and apprehending eight others,” said the UN chief, in the message issued by his Spokesperson, Stéphane Dujarric. “The Secretary-General expresses his deepest condolences to the family of the victim and to the Government of Egypt. He wishes a speedy recovery to those injured.”

Attacks “targeting United Nations peacekeepers may constitute war crimes under international law”, the statement continued, and Mr. Guterres called on the Malian authorities to take “swift action to identify the perpetrators of this attack and bring them to justice.”

On Twitter, UN peacekeeping chief, Jean-Pierre Lacroix, also issued his heartfelt condolences to the family of the fallen soldier noting that he and his colleagues from Egypt were “performing the critical task of protecting convoys”.

MINUSMA’s mandate from the Security Council began after extremist militias seized control of northern Mali in 2012, which following a failed coup, were repulsed by French military action the following year. A UN-backed peace agreement in 2015 signed between the Government and various armed groups, failed to stabilize the febrile central and northern regions of the northwest African country.

Earlier this week, according to news reports, the Prime Minister resigned together with his cabinet in the capital Bamako, in the face of widespread criticism from across the political spectrum, over the failure to make inroads against the continuing violence to the north.

Since 2013 when MINUSMA deployed, more than 190 peacekeepers have died in Mali, including close to 120 killed during hostilities.

The Secretary-General reaffirmed that the latest casualties “will not diminish the resolve of the United Nations to continue supporting the people and the Government of Mali in their quest for peace and stability.”

Download logo
MINUSMA/Harandane Dicko MINUSMA troops based in Kidal in the extreme north of Mali, ensure the security of the camp, and also the safety of the civilian population