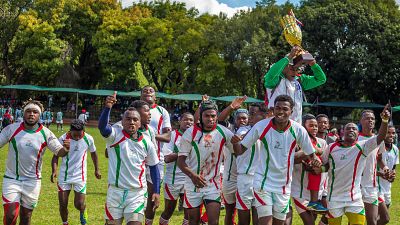 Madagascar’s resilience and crafty ball handling skills got earned them promotion into the Under-20 Barthes Cup after they broke the hearts of spirited Zimbabwe 25-27 at Prince Edward High School.

This win for Madagascar comes of the back on a massive 65-0 against Morocco in their opening match giving them the top spot in the Group.

Zimbabwe paid dearly for another slow start in addition to a series of errors, by half time Madagascar led 15-7, but the host came back fighting leading 25-22 five minutes to the close of the match.

Madagascar were rewarded for their vigilance and came back with a runaway try in the final moments.

You can never fault the energy of the boys, they wanted to play but they were probably not doing the right things in the right places,” said Mahari.

Meanwhile Morocco will be relegated from Group B after losing 38-6 to Ivory Coast to finish at the bottom of the log.