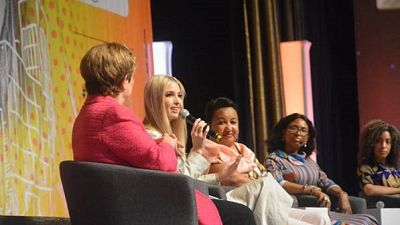 Advisor to the President Ivanka Trump gave the keynote speech during the first ever West Africa Regional Summit of the World Bank Women Entrepreneurs Finance Initiative (We-Fi), meeting with and hearing from local government officials, business leaders, and women entrepreneurs from the region. The United States was a founding member of We-Fi in 2017. In its first year, the We-Fi allocated $120 million toward project proposals helping women entrepreneurs around the world, which will help mobilize $1.6 billion in additional funds from commercial and other sources.

During the Summit, Ms. Trump discussed the U.S. government's work, in partnership with international organizations and the private sector, to empower 50 million women economically by 2025 through the Women's Global Development and Prosperity Initiative. The event also featured remarks from U.S. Senators Lindsey Graham and Christopher Coons, highlighting the importance of this bipartisan policy priority. The event concluded with a call to action by U.S. and African leaders, as well as leadership from Multilateral Development Banks, to enhance and target efforts to ensure equal and legal access to land, finance, and markets for African women.

Distributed by APO Group on behalf of U.S. Department of State.
Media files