Women can change face of Africa with enough access to finance 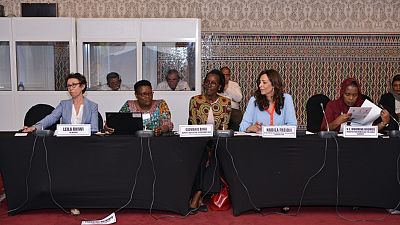 Access to finance by women in Africa is critical if the continent is to attain the sustainable development goals, Economic Commission for Africa’s (ECA) Deputy Executive Secretary, Giovanie Biha said Tuesday.

Speaking at an event to discuss the African Women Leadership Fund (AWLF) in Marrakesh, Morocco, ahead of the fifth Africa Regional Forum on Sustainable Development (ARFSD), Ms. Biha said adopting the right actions to integrate gender in Africa’s economies will result in financial inclusion, guarantee women’s economic empowerment and achievement of the SDGs, thereby helping change the face of the continent.

According to the ECA’s Women’s Report (2013), failure to integrate gender equality and women’s empowerment into national economies has cost African countries a combined $95 billion in lost productivity annually.

“This is an indicator that financial exclusion of women is not an option for our continent,” said Ms. Biha, adding the African Women Leadership Fund was an impact fund that aims to strengthen economic empowerment of women and accelerate the emergence of African women fund managers who in turn will invest in and develop African women-led businesses and micro-businesses.

Over the next decade the fund is envisaged to have made an investment of up to $500 million in African owned and women-led companies.

The fund is anchored on six pillars;

The ECA is supporting the operationalization of the innovative fund, a brainchild of the United Nations Deputy Secretary General, Amina J. Mohammed, African Union Commission Chairperson, Moussa Faki Mahamat and the AWLN.

Speaker after speaker praised the formation for the fund saying it will address the fundamental gap in the access of women to finance architecture.

Djibouti’s Women and Family Affairs Minister, Moumina Houmed, said the story of women and finance was similar to that of every other African country. She shared efforts being undertaken by her country, including capacity building of associations and cooperatives; partnerships with the private sector to train women entrepreneurs and getting banks to give women more access to finance.

“We know that even in family-owned businesses women have a much lower share. We have very few women entrepreneurs on the continent because of the hurdle of access to finance. As such, the fund seeks to lower these hurdles faced by women-owned businesses, promote investments in micro enterprises and take women’s cooperatives to the next level,” said Nabila Freidji, a Moroccan entrepreneur and member of the AWLF committee.

Thoko Ruzvidzo, ECA’s Gender, Poverty and Social Policy Division Director, spoke about the AWLF and what it is expected to achieve. “Failure is not an option,” she said, adding women’s financial inclusion in African economies was a must.

She said funds will be earmarked for each of the five regions of North Africa, East Africa, Central Africa, West Africa, and Southern Africa with a strategy being established for each region to address unique elements of the markets, or to reflect priorities for each region.

Priority would be given to women-led businesses. At least 65 percent of capital will be invested in women-led companies.

Ms. Leila Rhiwi, a representative of UN Women in Morocco, emphasized the importance of women accessing finance to bolster their businesses saying they have already proven themselves as entrepreneurs and drivers of the economy.

The high-level meeting was attended by representatives of the Moroccan business and financial ecosystem, government officials, senior women executives and young women entrepreneurs, among others.