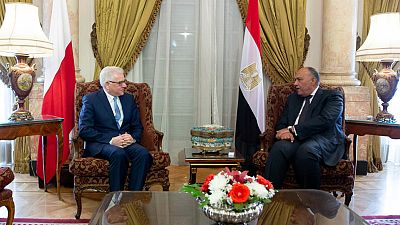 “Egypt is one of Poland’s key partners in Africa and in the Arab world,” said the chief of Polish diplomacy Jacek Czaputowicz on Sunday, on the first day of his working visit to Egypt.

The Polish foreign minister and his Egyptian counterpart Sameh Hassan Shoukry discussed bilateral relations with a focus on economic, security and defence cooperation, as well as cultural, scientific, and tourist links. The ministers also discussed international topics. Their talks focused on security, migration and Egypt’s role in the region. The officials also explored Egypt-EU relations and the Polish-Egyptian cooperation on the UN Security Council.

‎“Poland sees a potential for forging cooperation in energy, mining and industry, specifically in the production of agricultural machines, and in the agri-food industry,” said Minister Jacek Czaputowicz, pointing to a great potential for bringing forward Poland-Egypt trade and investment. When speaking about the possibilities to foster cooperation between Polish and Egyptian defence industries, Minister Jacek Czaputowicz mentioned among others the modernization of military equipment.

Minister Czaputowicz stressed that Egypt is Poland’s key partner in Africa and in the Middle East.

In the context of Egypt’s presidency of the African Union, the foreign ministers discussed major security matters of the region, including the ongoing military actions in Libya, the political and social situation in Sudan, the Syrian conflict and challenges facing the Middle East peace process. “We are aware of Egypt’s leading role in North Africa and in the Middle East. That is why we would like to encourage our partners from Cairo to join the working groups established as a follow-up to the Middle East Conference in Warsaw on 14 February 2019,” said Minister Czaputowicz. He went on to say that Poland appreciates Egypt’s role in the stabilization of the region, in the context of both the Israeli-Palestinian conflict, and Syria and Lebanon mediations, as a member of the anti-terror coalition and as part of the coalition of Arab states intervening in Yemen.

During plenary talks at the Egyptian MFA, Minister Jacek Czaputowicz expressed support for the Egyptian government’s involvement in the fight against terrorism and in economic and social reforms, aimed at achieving further stabilization and new momentum in the economic growth of the country with a population of a hundred million. He also expressed Poland’s support for the ongoing process to renew the dialogue between Egypt and the European Union. The minister underlined that as an EU member, Poland highly praises Egypt’s efforts to take forward its relations with the Community and to implement the goals set under the EU-Egypt partnership.

‎Minister Jacek Czaputowicz also met with the Secretary General of the League of Arab States Ahmed Aboul Gheit. They discussed regional security, including developments in Libya and Syria and the Middle East peace process. They also looked at the outcomes of the Ministerial to Promote a Future of Peace and Security in the Middle East, which was co-organized by Poland and the US in February in Warsaw, and talked about its follow-up activities in the framework of the Warsaw Process. Minister Czaputowicz outlined the arrangements regarding the establishment of working groups under the process.

The MFA head expressed his satisfaction with the recent high intensity of relations between the European Union and the League of Arab States. It was launched with the signing of a cooperation protocol in 2015, which has equipped the sides with the appropriate instruments to address common challenges, in particular as regards climate policy, migration, and the fight against extremism and terrorism.

In Cairo, Minister Czaputowicz also met with Pope Tawadros II, the Patriarch of the Coptic Orthodox Church“Poland is interested in strengthening religious and cultural tolerance in North Africa and worldwide,” said the chief of Polish diplomacy. He stressed Poland's deeply rooted solidarity with Christians in the Middle East, as manifested by aid programmes delivered for the region by the Polish government and the Catholic Church. Minister Czaputowicz also noted the activities of the Egyptian authorities to ensure the survival and development of Christian communities.The MFA head positively assessed the role of the Coptic Church in the Muslim world.

The chief of Polish diplomacy also took part in a reception organised by the Polish Embassy in Egypt on the occasion of the Third of May Constitution National Holiday.

Today, Minister Czaputowicz meets with Egyptian Minister of Antiquities Khaled El Anany for talks on the involvement of Polish archaeologists in research in Egypt, and with Sheikh Ahmad al-Tayeb, the Grand Imam of Al-Azhar, to discuss Poland-Egypt cooperation on inter-religious dialogue.

Distributed by APO Group on behalf of Ministry of Foreign Affairs, Republic of Poland.
Media files