Easter eggs with a difference

As Easter approaches, all over the world orders ramp up for chocolate bunnies and Easter eggs. But, have you ever thought about where chocolate comes from and its environmental impact?

There are approximately 5–6 million cocoa farmers around the world and, according to the International Cocoa Organization, around 70 per cent of the world cocoa is grown in small farms. As global demand for chocolate is on the rise, this number is set to increase even further.

But smallholder producers are hard to monitor, manage and work with due to their sheer number. Poor management of existing cocoa trees leads to low productivity, and forest clearing for new cocoa plantations. This, in turn, contributes to destruction of ecosystems, biodiversity loss, soil erosion and stream sedimentation.

Côte D’Ivoire is the world’s largest cocoa producer with the most smallholder producers. Yet deforestation remains a major threat to ecosystems, costing the country 64 per cent of its forest cover between 1990 and 2015. If this trend continues, Côte D’Ivoire is expected to lose its entire rainforest by 2030.

“Cocoa is a key provider of livelihoods for millions of people in West Africa and the demand for chocolate will forever be strong,” says James Lomax, UN Environment’s Sustainable Food Systems and Agriculture Programme Officer.

“It is therefore critical that industry and government work together more effectively to grow the cocoa sector as a model sustainable and deforestation-free agriculture. At the same time, entrepreneurs can play a fantastic role in not only brining quality chocolate for Ivorians to enjoy but also to educate and raise awareness of the current situation in Côte D’Ivoire.”

Local chocolatiers are aware of challenges in the industry and are increasingly supporting small local farmers to produce organic cocoa beans. Organic agriculture is a holistic system, which promotes better health and management of the whole ecosystem.

Dana Mroueh is one of them. A 30-year-old Ivorian, she founded the company Mon Choco to find eco-friendly ways of producing chocolate in a country that is threatened by its unsustainable production patterns.

Mon Choco outsources cocoa supply to local farmers that are sustainable and that produce organic cocoa. Mroueh highlights that finding these farmers can be a challenge.

Yet she is passionate about relying only on organic cocoa beans, which Mon Choco grinds using bicycles, to reduce energy consumption. They also only use recycled paper in their packaging, and reuse the shell of the cocoa.

“Using bikes to grind the cocoa allows us to reduce our energy impact, get some exercise and produce chocolate. It can’t get better than that!” says Mroueh.

Employees at Mon Choco often compete to see who can bike the fastest—and therefore produce more chocolate—with the winner getting their picture on the office wall.

Mroueh established this eco-friendly chocolate business for many reasons. “Although Côte D’Ivoire is the world’s largest producer of cocoa, the local population doesn’t really know what chocolate tastes like,” she says.

Indeed, chocolate consumption in the country is one of the lowest worldwide, and chocolate bars are considered a luxury product due to their very high prices.

Producing chocolate locally represents a way in which Mroueh can celebrate the beauty of her country as well as its fertile soil. It is also a way to honor her grandfather. “He always dreamt of letting Ivorians taste their country’s choco, and this business was originally his idea,” she explains.

Easter is an incredibly busy period for Mon Choco, and Mroueh and her team are busy biking to grind the chocolate and designing new products. “For the past three years, we have prepared special products for Easter, such as chocolate rabbits and eggs,” she says.

“These have the added value of being environmentally friendly, which makes Easter a much sweeter experience!”

Establishing an eco-friendly chocolate business is not easy, and Mroueh has faced numerous difficulties on her journey.

“Our main challenge is finding local organic cocoa. We produce a lot of cocoa in Côte D’Ivoire, but most of it is produced using pesticides and other chemicals,” she says.

Expansion of cocoa production in the country remains a threat to swathes of rainforest, and flora and fauna endemic to the country. “We need to educate farmers and raise awareness of the impact of unsustainable cocoa production,” Mroueh said.

She is already working to do just that. Although her organic cocoa supply is currently outsourced and grown by local farmers, she dreams of eventually expanding the business to create employment while helping her business grow in an environmentally friendly manner.

Beyond that, Mon Choco is looking further afield, and pursuing another dream: “Exporting to Africa and Europe, now that we are becoming a bit famous in Côte D’Ivoire,” laughs Mroueh.

The Young Champions of the Earth prize, powered by Covestro, recognizes and celebrates young entrepreneurs making a difference for the environment. The winners for 2019 will be announced in September. Applications open again in January 2020. Stay tuned! 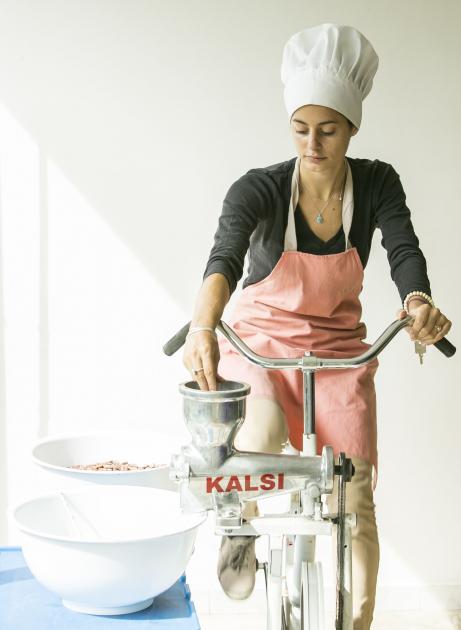