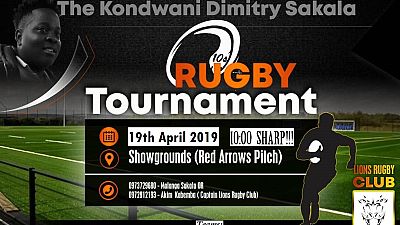 Linda Lions Rugby Club of Chilanga, which was established in 2016 in collaboration with the Tag Rugby Trust, will be hosting their first ever invitational youth rugby Tournament on Friday 19th April, 2019.

Tournament Organizer Akim Kabemba, who is also Tag Rugby Trust Country Manager said the Tournament is being held in honor of their fallen team-mate hence it being dubbed KHONDWANI SAKALA MEMORIAL TOURNAMENT. “ Khondwani Sakala was one of us from the start, he was very instrumental in helping the team achieve all that we did and he did his part in ensuring new comers felt welcome. After his sudden demise, his family graciously offered to help organize a tournament in his memory and we are highly appreciative to them, that even though he is no more, his memory still brings people together”.

Get Into Rugby Zambia Project Manager Tom Chaloba expressed delight at the growth of the game. He said “As a Union, we are extremely extatic that the game is making significant inroads in areas which were virtually inaccessible and unexpected to have rugby being played. We are aware that some of the invited teams include

6. University of Zambia plus a number of Schools and Communities who are participating in the u12 Tag Rugby games.

Come and witness the future of Zambian Rugby on display.