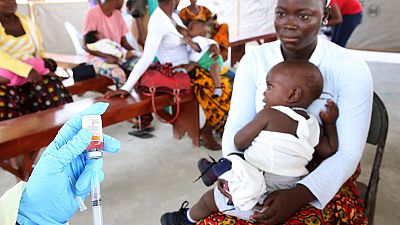 Noting a 300 per cent surge in the number of measles cases during the first three months of this year, compared to the same period last year, two UN agency heads declared on Monday that we now stand “in the middle of a global measles crisis”

“Cases have soared across the world, including in places where measles had previously been eliminated, like the United States”, asserted Henrietta Fore, Executive Director of the UN Children’s Fund (UNICEF) and Tedros Adhanom Ghebreyesus, Director-General of the World Health Organization (WHO).

Measles is almost entirely preventable through two doses of a safe and effective vaccine, despite being highly contagious. The UN agency chiefs painted “an alarming picture” of the rate of infection, saying that “by the time you finish reading this, we estimate that at least 40 people – most of them children – will be infected by this fast-moving, life-threatening disease”.

A clear and dangerous trend

Following two years of consecutive increases, the Democratic Republic of the Congo (DRC), Ethiopia, Georgia, Kazakhstan, Kyrgyzstan, Madagascar, Myanmar, Philippines, Sudan, Thailand and Ukraine, are all in the midst of current outbreaks. It is also spreading fast among clusters of people, who are resisting vaccination, in countries with high overall vaccination rates, including the United States, Israel, Thailand and Tunisia.

“We're worried not only because measles can be so severe, it still causes over 100,000 deaths every year, but also because it is extremely contagious” said the agency chiefs.

Referring to measles as “the canary in the coalmine of vaccine preventable illnesses”, the UNICEF and WHO heads explained that “around the world, millions of children are still missing out on lifesaving vaccines, leaving them and their communities vulnerable to disease and deadly outbreaks”.

Living in countries where healthcare systems are challenged by poverty and conflict, many lack access to effective vaccines.  But “in several high- and middle-income countries”, the UN agency heads lamented, “there are parents who are delaying or refusing to vaccinate their children because they're unsure of the need for vaccines or that vaccines are safe”.

Moreover, the UN agencies revealed that uncertainty is often fueled by confusing, contradictory online information, which spreads fast, with harmful content transmitted on digital channels; amplified by algorithms that reward controversy and clicks; and exploited by anti-vaccine activists to sow

A young boy is administered measles and rubella vaccine at a health post in Gorkha District, Nepal., by UNICEF/Kiran Panday

Additionally, scientists and health advocates have even been harassed for sharing information, according to the agencies, while unproven so-called vaccine alternatives are being marketed for profit.

“It is a collective responsibility to support parents and build a more positive environment for vaccination, on and offline”, the UNICEF and WHO chiefs said.

Both agencies welcomed initial steps taken by digital companies, including Facebook and Amazon, to quarantine myths over vaccination safety, but say “it will take much more…to make sure all children get their vaccines at the right time”.

To reverse the trend, they flagged that everyone must advocate for vaccines, including by promoting scientific literacy on health and vaccines.

“It means governments must invest in primary care and immunization, and make sure these services are affordable, accessible and truly responsive to parents' needs, especially those in the poorest, most disadvantaged communities” the two stressed.

For their part, WHO and UNICEF, are working with other partners, such as the Vaccine Alliance, a public-private partnership known as Gavi, to ensure that vaccines reach more people in more countries than ever before.

“It will take long-term efforts, political commitment and continuous investment, in vaccine access, in service quality and in trust, to ensure we are, and remain, protected together”, said the agency heads.