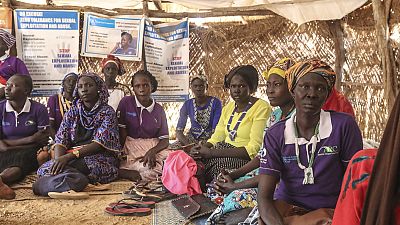 A group of women sing and dance joyfully, as they welcome the head of the UN Mission in South Sudan (UNMISS) to their secondary home – a resource centre for women and girls.

Located in Aweil, in the far north-west of South Sudan, the centre is a part of what is known as ‘Women and Girls’ Safe Spaces’ – dedicated to ensuring women have a place where they can feel safe as they share information and experiences about gender-based violence, and how to prevent or respond to it.

“The centre is meant for women and girls as a friendly space centre where they can come and talk among themselves. They get some sessions about how they can live within the community, and also prevent some of the violence in the community, or when they come across someone who has experience violence, they can also refer them where necessary,” she says.

Beyond sharing information about preventing gender-based violence, the women also use the space as a learning centre, where they obtain different skills with which to improve their livelihoods.

“We thank your respected office for constructing Aweil Women Resource Centre, under your Quick Impact Projects. And we are hereby requesting your respected office in Juba to help women under QIPs [Quick Impact Projects] to build more women centres where women can gather to do activities, to allow [them] participate in development and peacebuilding,” says Areda Ide, Chairlady, Aweil Women’s Union to the head of the UN Mission.

Under a shade, some are making beautiful beads, which cost between 10 and 15 US dollars – a significant amount in a country with very low levels of income.

The centre offers specific training about responding to rape survivors.

And how was the situation like, before the centre was established?

“Most of the women were experiencing different forms of violence, but they did not know where to go. They didn’t even know their rights. Now most of the women know what they’re here for,” says Ajok.

And when they are not sharing information and creating things that will earn them income, they seem to just enjoy singing and dancing – a likely a communal therapy for the traumas of war they have endured.

“All the difficulties we were facing as women have reduced, and we come here as women to solve some of our stress. By the time we go home, it has gone,” says one woman in Dinka language. “That’s why we always come here to spend our day. This centre has helped us women a lot.”

Within the UN Mission in South Sudan, the Relief, Reintegration and Protection Section works with humanitarian partners to build such safe spaces, with support from UNFPA – the United Nations Population Fund. The visiting head of UNMISS said he wanted to see how the mission could work with the government in the area to create more opportunities for people, and particularly for women.

“I’m very pleased to be here with the women at the women’s centre, because for the United Nations, and for many people from the United Nations here with me, the future of women is very important for us in South Sudan,” said David Shearer, Special Representative of the Secretary-General and head of UNMISS.

Women and girls’ safe spaces were established by the UN in consultation with the community, with women and girls taking part in mapping their community and helping to identify which times and places are safe and which are not.