Mauritius Rugby Awards 2019 - A Night of Rugby excellence to remember 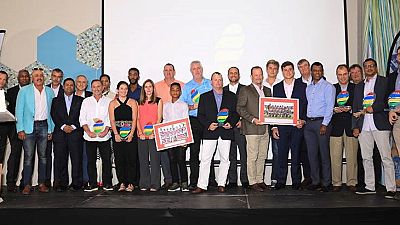 On a night to remember, the Rugby Union Mauritius (www.Mauritius.Rugby) held its first ever Rugby awards and celebrated some of its most outstanding achievers in the presence of several renowned personalities as well as greats of the game of the past and present.

While Ferrat who won the bronze medal with the U18 Mauritian team at the Jeux Africains de la Jeunesse (JAJ) in 2018, Ritter led her team, the Northern Pirates Womens 7s team to reclaim their Mauritius Women 7s Champions title from their arch rivals Highland Blues in a neck to neck season finale in December 2018. Ferrat’s father who picked the trophy on his behalf was all praise of his son: “Etienne has shown great character to better himself and has put in much efforts to reach his goals. I cannot by any prouder than receiving this award for him.” Amélie

Ritter dedicated her award to her team and coaches: “I would have never won this award had it not been the team effort of my team mates and coaches support”

Highland Blues Rugby Club scooped the Club of the Year 2018 award in a breathtaking season in which the Blues were national champions in all their respective categories, namely – Sevens Men, Tens Men, XV Men, Sevens Women, Touch Women.

The Coach of the Year award went to Gérard Guidi of the Northern Pirates Women 7s Rugby team. “I was not expecting to win because I believe many of my colleagues deserved to win it as well.  I take much pride for this award and share it with my players who showed great character all through the season” – he said.

The first ever Hall of Fame was awarded to Bruno Bax (ex-Mauritius International and Coach of Highland Blues XV). He was reminisced the season of 2018 and thanked all those who have been by his side since his early days: “Rugby is a team sport and I could not have achieved this all by myself without the unconditional support of my friends and my beloved wife, I am immensely proud to win this reward”

Among other winners, Emma Maujean won the Best Player award for FIT Rugby, Adrien Rivalland was awarded Best Referee and Honorary Awards were presented to Patrick Bradshaw and Jean-Pierre Michel. The U18 and U12 National teams were both named Best National Team

Two game development awards were given to Bel Ombre and Rodrigues as Club of the Year and to Jean-Paul De Maroussem as Coach of the Year.

A memorial award was given to Tim Nelson who sadly passed away earlier in 2019 to prolonged illness. He is fondly remembered as the juniors’ coach of Western Cowboys (Mauritius) and U12 Mauritius National Team at Monaco. Tim Nelson played rugby at professional level at London Welsh, Wasps, Albi, Périgueux.

This first Mauritius Rugby awards will have been one to remember until the second edition next year as explained by the president of the Rugby Union Mauritius, Kevin Venkiah: “This awards night was long overdue and it was imperative for me and my team to reward all those who have been helping and encouraging the development of rugby in Mauritius. We can already see the results of our efforts through the extension of our development program in creating rugby clusters such as Southern Cyclones, Port Louis Sailors, Rodby (Rodrigues Is.) etc. We have been able to impact at least 12,500 young players and set up promising national youth teams of U18 (boys and girls) and U14s.” Arnaud Dalais who presides the The Rugby Excellence Club, entity of the Rugby Union Mauritius explained further that the REC is focused mainly on two challenges: “Values transmission and finding funds to enable further development of the game in other regions of Mauritius and secondly, set up the benchmarks for Paris2024.”

Coach of the Year
Gérard Guidi

Club of the Year
Highland Blues

Club of the Year (Development)
Bel Ombre and Rodrigues

Referee of the Year
Adrien Rivalland

Pictures of the Mauritius Rugby Awards 2018 are available: Here (https://bit.ly/2uWWb4E)