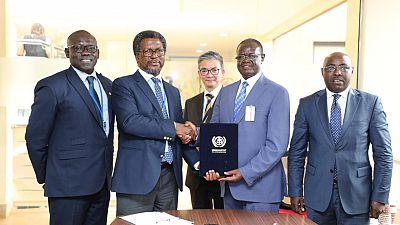 UN-Habitat has committed to supporting the County Government of Meru in Kenya with a grant for collaboration on Municipal Finance, financed by the Swedish Development Agency SIDA. The initial focus of this grant will be the implementation of Meru County’s “My Town, my Business” initiative, an innovative endeavor to promote proactive and responsible citizenship for improved revenue collection and service delivery.

At a meeting held at the U-Habitat headquarters in Gigiri, the Governor of Meru County, Kiraitu Murungi pointed out that increasing the own source revenue of the County will require the government to more directly showcase how taxes are being used for improved service delivery and for citizens to take ownership of their surroundings and fulfil their collective responsibilities.

This initiative comes at a crucial time, when Meru is under pressure to increase its own source revenue. The cost of Meru’s devolved functions was estimated to be 12th largest in the country, and yet it receives one of the lowest per capita contributions from the Central Government. While own-source revenue can help fill this gap, the County Government has struggled to reach its own revenue targets and only collected USD 5.53 million of the targeted USD 7.73 million in the financial year 2016/2017. With a yearly pro capita tax revenue of USD 4.07 million (2016/2017), the County Government is eager to collaborate with UN-Habitat and benefit from its global expertise to increase the resources it has available to invest in the development of the County.

The project foresees UN-Habitat providing a team of Municipal Finance experts to analyze the tax design and tax collection processes of the county and come up with comprehensive and actionable recommendations for quick improvements in revenue. The insights which emerge from this collaboration will then be used to inform the “My Town, my Business” initiative and transform it into a flagship programme for replication in other parts of Kenya.

This initiative will be implemented by the Urban Economy and Finance Branch at UN-Habitat, which works globally on Municipal Finance, Local Economic Development and Youth and is currently launching several similar projects in other Kenyan counties.

UN-Habitat was represented by the Director of the Regional Office for Africa, Mr. Naison Mutizwa-Mangiza and the Coordinator of the Urban Economy and Finance Branch, Mr. Marco Kamiya.