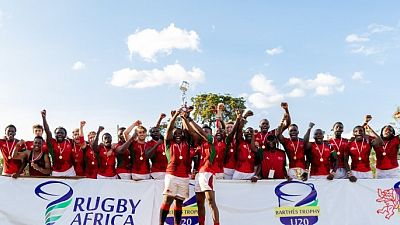 Chipu as the Kenya Under 20 side is referred to by the fans lifted the Barthes Trophy Cup on 7th April at the KCB Sports Club Ruaraka. Chipu beat the defending champions Namibia 21-18 in what was a very intense match.

Delron Brandt drilled in two penalty kicks for Namibia in the first ten minutes for them to take a 6-0 lead. Kenya’s Brian Amaitsa aggression on attack saw him fend off two defenders and head for the in goal area landing Chipu’s first try and narrowing the gap to 6-5 after the conversion sailed wide. Exactly 24 minutes after Amaitsa’s try and off a break down, flyhalf Michele Brighetti send the ball wide to land in Beldad Ogeta’s hands and he dashed for the try box extending Chipu’s lead to 10-6 at the breather.

In the second half, Chipu’s infringement in their 5M resulted in Namibia’s Shaun Van Wyk landing their first try and they took the 11-10 lead. A repeated offense by Chipu saw them reduced to eleven played but they kept their cool and earned themselves a penalty at the opponents 22. Andrew Matoka split the posts beautifully, Chipu taking the 13-1 lead with 20 minutes left on the clock.

Namibia added seven points through Brandt’s try in the 67th minute and a conversion, Namibia now holding the 18-13 lead over Chipu. Bonface Ochieng, Chipu’s Captain landed the try that leveled the scores to 18 a piece off a rolling maul, Dominic Coulson’s kick sailing wide.

With three minutes left on the clock, full back and man of the match Andrew Matoka drilled in the winning penalty kick 40Ms off Namibia’s try line. Chipu taking the 21-18 lead.

Namibia’s attempt at scoring a try while deep in Chipu’s half was unsuccessful as Chipu won the turnover. They’d then kick the ball out claiming their first win ever over Namibia. Chipu will represent Africa in the Junior World Rugby Trophy in Brazil from July 9th to 21st July.