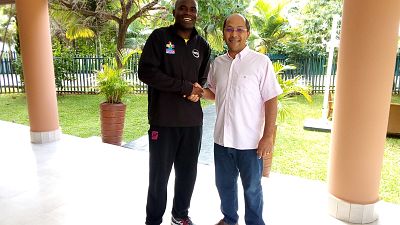 The Founder and Chairman of media giant Apo Group (www.APO-opa.com) Mr Nicolas Pompigne-Mognard on Saturday 6th and Sunday 7th April, 2019 was at hand to witness first hand the strides and efforts being implemented by the Zambia Rugby Union (www.ZRU.rugby) towards growing the game in the country.

The media guru who on Saturday watched a women's rugby game between Red Arrows Rugby vs Green Eagles Rugby at the Showgrounds in Lusaka expressed delight at the competition exhibited by the women. “I'm totally impressed by the levels of competition among the rugby ladies, it symbolises passion and dedication, both teams have a mixture of youth & experience which is very encouraging and is a catalyst for continuity”.

On Sunday 7th April morning he had a breakfast meeting with the ZRU Boss and ZRU Communications Manager Tom Chaloba where he explained some of the ways which the Union can employ to maintain and indeed grow it's visibility within Africa and beyond.

Later in the day, Mr Pompigne-Mognard visited the Lusaka Rugby Club to appreciate the strategic Pathways being undertaken by the club to execute its Get Into Rugby program. He was joined by ZRU CHIEF General Clement Sinkamba, ZRU COMMS Manager Tom Chaloba, Former ZRU PRESIDENT Martin Musunka, ZRU LIFE VICE PRESIDENT Judge Justin Chashi, Former Zambia Sevens Coach and current National Sevens Director Musa Zimba, Former Lusaka Rugby Club Chairman Mibela Chileshe plus many other rugby enthusiasts. Michelo Shelleni, who is the club's youth coordinator announced that each Sunday morning, they record an average of 60-70 kids aged between 10 years to 19 years. “In our records, we have close to 200 girls and boys registered, but due to various reasons our weekly training sessions range between 60-70, which usually increase when children are on school holidays”.

In his address to the young players and those in attendance, Nicolas Pompigne-Mognard applauded all the hard work being done by the Zambia Rugby Union and its affiliates in implementing the Get Into Rugby program across the country. He said, “The future of African rugby generally and Zambian Rugby in particular lies in the young girls and boys, that is why APO MEDIA GROUP will endeavour to our part in showcasing your achievements and partnering with you to expand your efforts towards growth”.