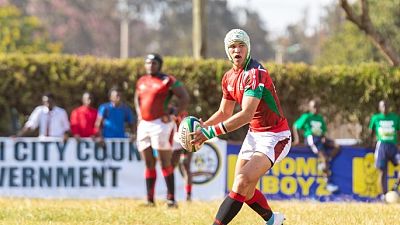 Kenya Under 20 Head Coach Paul Odera has made two changes to the Squad facing Namibia on 7th April in the Barthes Cup Final. Michele Brighetti will be the starting flyhalf while Dominic Coulson moves to the inside center position. Douglas Kahuri falls out of the match day 23 completely while Frank Aduda is set for his debut.

“Both are flyhalfs and this gives us options when kicking and when watching Namibia play, that 10-12 channel needs the right decisions being made defensively and also on attack. Douglas Kahuri falls out of the match day 23 because Namibia pride themselves on forward play, so we’ve loaded the forwards and only have two backs on the bench. We’ve brought in Frank Aduda who was not in the squad that played Tunisia on Thursday,” said Odera.

Chipu have a very good chance of winning: playing at home is an added advantage to the side, the teams execution has been nothing short of perfect and their tight five are very mobile. “Our bench is really strong, this means when we bring on people they are adding impact to the team as opposed to reducing the energy and skill level. Those are the two things that give us an opportunity to beat Namibia for the first time at this level.” concluded Odera.