Zohrab Mnatsakanyan's meeting with the representatives of Armenian community in Ethiopia 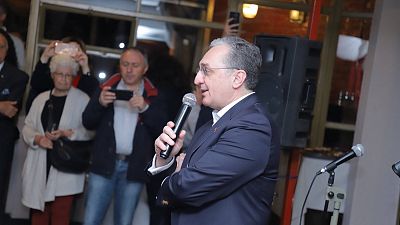 On April 4, the Foreign Minister of Armenia Zohrab Mnatsakanyan, who is on an official visit to Addis-Ababa, met with the representatives of the  Armenian community in Ethiopia.

Expressing gratitude for the warm reception Minister Mnatsakanyan underlined the importance of the Armenian community in social and political life of Ethiopia and its bridging role in relations between the two countries. Foreign Minister of Armenia commended the role of small, but active community of Armenians in Ethiopia for preserving the national identity, highlighting the importance of activation of contacts and ties with the Motherland. “During the visit, we could feel the deep respect towards Armenians in this country.

“We are a nation which has always been able to stand firm, to create wealth for itself and its communities. And you prove that. The confidence we have towards our country derives from every Armenian who creates, as we say, the “reputation of an Armenian”. I am grateful that you have invested to this confidence here in this country. We are more than decisive in bridging our countries. You are the number one ambassadors of Armenia in Ethiopia. And once again I thank you. “

The Foreign Minister of Armenia briefed on the priorities of Armenia's foreign policy and Government’s development program, which is focused on boosting an education driven by innovation, high technologies and creative education.

Before meeting with the Armenian community in Ethiopia, the Foreign Minister visited St. Gevorg Armenian Apostolic Church in Addis-Ababa.

Distributed by APO Group on behalf of Ministry of Foreign Affairs of the Republic of Armenia.
Media files