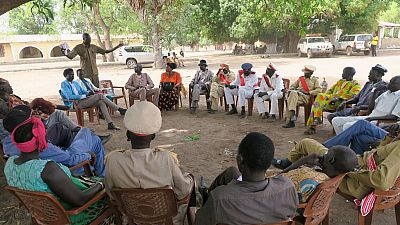 The two neighbouring communities of Tonj and Gok have agreed to establish a joint border court to arbitrate cases of inter-communal violence. The court, to be comprised of seven traditional chiefs, will have jurisdiction on thefts and killings related to cattle.

Asked about importance of this court, one of the longest serving chiefs, Gum Mading Akuecbeny, optimistically stated that with proper backing from local authorities and the United Nations Mission in South Sudan, justice and peace will reign once again.

Manyang Mading, on behalf of the cattle camp youth known locally as Gel-Weng, emphasized that it is imperative to hold perpetrators of crimes accountable and hopes the establishment of a joint court will make that happen. Gel-Weng is a Dinka word that literally means “to protect cows” from potential raiders.

“Setting up a joint court will reinstate stability and rule of law between our communities. For so long, our people have suffered because of impunity,” he said.

Ms. Achol Malek, a women’s representative, decried the impact the conflict has had on women and girls. She appealed to rivaling border communities to embrace each other for harmonious relations to prevail.

“We have suffered a lot as mothers, sisters and wives. This conflict has robbed our community of basic human rights. Women and girls are being raped and even killed,” she stated.

“You are serving as an example to other states in South Sudan and leading the way in cooperation and promotion of peaceful co-existence among communities,” he said.

The peace conference was facilitated by the United Nations Mission in South Sudan (UNMISS).