Kenya and Namibia Sail Through To The 2019 Barthes Cup Final 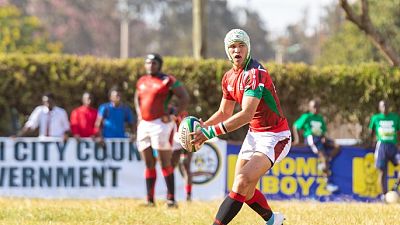 Kenya sailed through to the Barthes Cup 2019 final after an emphatic 73-0 win over Tunisia at the KCB Sports Club. Seven minutes after kick off, Captain Bonface Ochieng grounded the first of Chipu’s eleven tries. Fly half Dominic Coulson skillfull opened up Tunisia’s defense for him to slice through it and off load to George Maranga who landed Chipu’s third try. Maranga’s try was sandwiched Beldad Ogeta’s two tries in the first half with Coulson adding the three conversions, Chipu taking a 26-0 lead at the breather.

Head Coach Paul Odera made several impactful changes to his charges as the team resumed for the second half. George Kiryazi played in Coulson who sent the ball wide to find Geoffrey Okwach who raced for the try box, Andrew Matoka’s conversion taking the scores to 33-0 in favour of the hosts. A brilliant chip and chase by Michele Brighetti resulted in him landing Chipu’s sixth try right under the posts as the crowd went wild in support of Chipu. Reserve scrumhalf Barry Robinson was next on the scoreboard as he landed Chipu’s 7th try from Kenyan scrum. Brighetti was the engine behind Okwach’s second try that was followed by tries from George Kiryazi, Beldad Ogeta and George Maranga with Matoka adding all the conversions except the last one by Maranga.

The 1:30pm kick off ended in the defending Champions, Namibia, walking away with a comfortable 45-12 win over Senegal.

Namibia lead 19-7 at half time with tries from Elmaro Beukes, Denzo Bruwer and Italoo John Amutenya with Bruwer adding the last two conversions before Senegal’s full back Ameth Sall dotted down in the 28th minutes with Mansour Sall adding the twos.

The second half, Darryl Wellman, Denzo Bruwer, Lincoln Beukes and Darnryl Wellman all landed tries for Namibia in the second half with Bruwer adding three conversions. Ibrahim Diaby landed Senegal’s second try and final try in the match.

Senegal and Tunisia will face off in the 3rd and 4th match on Sunday 7th April before Namibia take on Kenya in the 2019 Barthes Cup Final at 4:00pm. Entry to the ground is 300/- at the venue entry point.