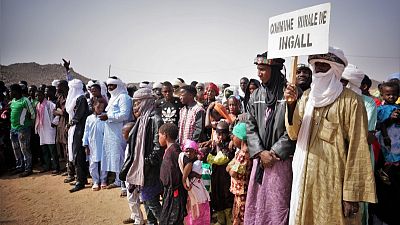 Situated in Agadez Region, northern Niger, and roughly ten hours from Agadez city by road, the town of Iferouane is home to the popular Festival de l’Aïr. Held yearly since 2001, the festival is an opportunity for host communities, local actors and tourists to reconnect and celebrate local traditions over three consecutive days.

Early one February morning, local businesses started setting up at the festival site, against the backdrop of Mount Tamgak. Under the scorching mid-day desert sun, local craftsmen sell their jewellery to curious tourists, while people vote to crown the best trained camel at the other end of the site. Traditional dances were in full swing, as each of the 15 communes in the Agadez region proudly displayed its best outfits and talents — Iferouane was booming with life and enthusiasm.

This year, for the first time, IOM took part in the nomad Festival de l’Aïr in Niger. The festival, now in its 14th edition, is one of the most important events in Niger. It was the perfect occasion for the International Organization for Migration (IOM) to officially launch its community stabilization (CS) activities, funded through the EU-IOM Joint Initiative for Migrant Protection and Reintegration.

IOM’s EU-supported CS work in Niger focuses on further consolidating the reintegration activities already taking place in Agadez, Arlit, Bilma, Dirkou, Djado and Fachi, but also on implementing new initiatives in other places, following a needs assessment and taking into consideration the areas most affected by migration flows.

During the festival, IOM set up its stand between a local shoe vendor and some phone credit providers. Volunteers from IOM’s CS projects in Arlit assisted in distributing flyers and providing information to people approaching the stand. IOM’s team of youth volunteers, who are involved in various social cohesion projects in Arlit and exceptionally committed to their civic duties, were eager to help.

“It was a unique experience today to work side by side with our IOM friends,” said youth volunteer, Mayaki. More than 3,000 people were reached through IOM’s CS activities during the Festival de l’Aïr this year.

Cooperative “Tchimaka” in Arlit was one of the many small businesses that sold its products during the festival, and one the five that IOM is supporting in Arlit, in order to promote youth employment and community stabilization. Aichitou, food processing expert and president of “Tchimaka”, was grateful for the opportunity to sell her products during the festival: “It’s good for us to participate in such events regardless of how much we sell today. Exposure is crucial.”

As part of IOM’s CS activities during the festival, a football tournament was organized for members of the host community, which brought together young people from all corners of Iferouane. Peace and social cohesion messages were shared with participants at break time.

The theater group AKOU, one of the most popular in Iferouane, captivated its audience during four different participatory theater plays focused on civil rights and peace. Adults and children curiously approached the scene, eager to see what the fuss was about while some even interacted with the performers.

IOM’s CS projects provide support to the communities most affected by migration flows, and aim to lay foundations for durable solutions, lasting peace and sustainable development.

“It’s vital for us to participate in cultural events like these that encourage interaction between different communities,” said Maria Veger, IOM Niger CS Officer. “Not only is it a way to promote and facilitate the local heritage, but it’s also a means of showing the population of Agadez that we are in this together.”

Seeing the crowds and high spirits in Iferouane, the theme “Peace and Security” seems like the right choice for this year’s edition. The region has seen its fair share of setbacks related to insecurity, but events like the Festival de l’Aïr give the community hope that the once flourishing tourism industry can still be revived. The event has attracted not only host community members, but also the international community — from ambassadors to journalists and NGO workers. With any luck, this will be just the boost the tourism sector in the region needs.

“Seeing all these different communities come together for the weekend in one of the most beautiful parts of Niger gives me hope for the future,” said Azaoua, IOM Outreach Officer in Agadez. “When you attend such festivals, you come to realize that social cohesion really lies in tradition at its core.”

The activities organized for the Festival de l’Aïr under IOM’s Community Stabilization (CS) projects were funded by the European Union. IOM’s CS projects aim to support governments and civil society in reducing factors that lead to irregular and forced migration, integrating the needs of marginalized groups and host communities, and responding to the impact of migratory flows on communities.