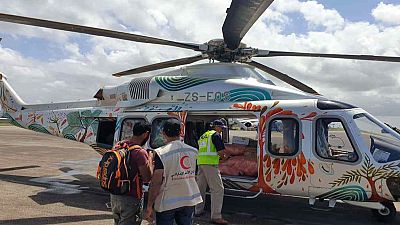 The Emirates Red Crescent, ERC, has reinforced its efforts to assist people affected by Cyclone Idai in Mozambique, benefitting over 75,000 people in 17 districts in the three provinces that were most affected by the cyclone, which hit three countries in the southeast of the African continent.

The aid highlights the position of the UAE’s wise leadership and its commitment to its humanitarian responsibility towards affected African countries, and is in implementation of the directives of His Highness Sheikh Mohamed bin Zayed Al Nahyan, Crown Prince of Abu Dhabi and Deputy Supreme Commander of the UAE Armed Forces, and the monitoring of H.H. Sheikh Hamdan bin Zayed Al Nahyan, Ruler's Representative in Al Dhafra Region and Chairman of the ERC.

The humanitarian mission continues to deliver aid to those affected in Mozambique, despite the challenges posed by the cyclone, such as heavy rainfall and floods. The ERC utilised helicopters to drop aid in affected areas with displaced people.

The ERC delegation strengthened its cooperation with the National Disaster Authority of Mozambique and drafted a unified response plan to increase the number of beneficiaries.

It also drafted a health response plan to counter the emergence of diseases, especially malaria and other epidemics.

The UAE announced that it would provide AED 18.3 million in emergency aid to Mozambique, Zimbabwe and Malawi, following the devastation incurred by Cyclone Idai.