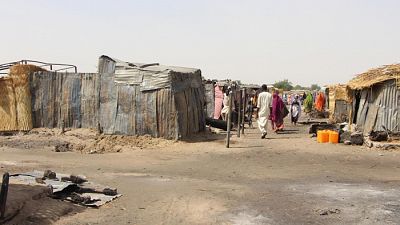 An estimated 30,000 people are in acute need of shelter and other basic necessities in the northeastern Nigerian town of Monguno after fleeing fighting between government forces and armed opposition groups, the international medical humanitarian organization Doctors Without Borders/Médecins Sans Frontières (MSF) said today, calling for a coordinated aid response ahead of the rainy season in May.

The conflict in Nigeria's Borno state has led to a massive humanitarian crisis over the last 10 years. Since December 2018, renewed clashes forced tens of thousands of people to flee to the government-controlled towns of Maiduguri and Monguno, joining many more people who were previously displaced.

“People who recently arrived in Monguno fled their homes, leaving everything behind,” said Musa Baba, MSF humanitarian affairs officer. “They come from areas where they could farm. Now, they are sleeping on the streets or wherever they can find space. They are hungry, thirsty, and exposed to very high temperatures during the day and low temperatures at night.”

In December, Monguno itself was attacked, causing aid workers to withdraw and leaving thousands of people without adequate assistance. Yet displaced people continue to arrive daily in the town.

The existing camps for displaced people are overwhelmed. People living in the open with little sanitation and drinking water are at risk of pneumonia, diarrhea, and malaria, among other preventable diseases. With few latrines, most people use open defecation areas, which are likely to flood in the upcoming rainy season, with catastrophic results.

People living in the open with little sanitation and drinking water are at risk of pneumonia, diarrhea, and malaria, among other preventable diseases. MSF is running a 10-bed emergency room for adults in a facility run by the Ministry of Health in Monguno as well as providing people with mental health support. Following an accidental fire in February in a stadium where displaced people camped, MSF distributed 500 kits of essential items including mats, tarpaulins, blankets, jerrycans, cooking equipment and hygiene items.

Many of the displaced people in Monguno describe years of suffering and displacement as the conflict in Borno state continues. Hajja Bukar, a 35-year-old woman from Baga, lost her first child to illness five years ago when their family fled an attack on their village. They returned home months later, but two months ago, they were attacked again.

“Then the insurgents attacked our village at 4 a.m.,” Bukar said. “Houses were burned and some people were burned to death while sleeping in their houses. That’s why we came back here. … We are all afraid of going to the farm. When our men try to go there, they are killed by Boko Haram. The insurgents also come to our houses at night to demand foodstuffs. And if you can’t give them what they ask for, they kill you.”