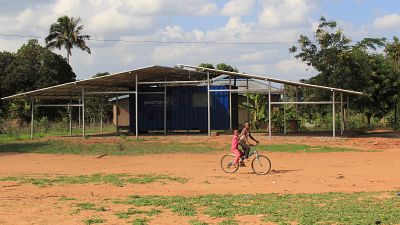 ENGIE (www.ENGIE.com) inaugurated today its first PowerCorner in the Zambian village of Chitandika in presence of Matthew Nkhuwa, the Zambian Minister of Energy, ENGIE’s leadership team as well as local stakeholders. Chitandika, located in the East of Zambia, counts 378 households (1500 inhabitants) who previously were deprived access to electricity. With the installation of this first PowerCorner, ENGIE confirms its progress in off-grid renewable energy solutions to improve electricity access in Africa.

This mini-grid provides energy to households and local businesses and supports public services such as the Rural Health Centre and 2 schools. ENGIE’s PowerCorner will foster economic development by enabling other electrical productive uses (such as water pumping for agriculture use or carpentry and welding machines) and by triggering business opportunities for entrepreneurs in the village.

ENGIE has successfully developed its own approach to mini-grids for the electrification of villages in Tanzania in addition to Zambia with a total of 13 mini-grids in operation and construction.  ENGIE is pursuing its goal to develop 2,000 mini-grids by 2025in Africaenabling 2.5 million people, entrepreneurs, SMEs and local businesses to access renewable, reliable and cost-effective energy.

As part of its decentralized energy developments, ENGIE is also expanding Fenix, its solar home system business. Since the launch of its operations in Zambia in October 2017, ENGIE Fenix has reached 70,000 customers in the country, supplying 350,000 people with clean lighting and power. To date, Fenix has sold over 400,000 solar home systems across Uganda, Zambia, Nigeria,  the Ivory Coast and Benin, changing the lives of over 2 million people.

Isabelle Kocher, CEO of ENGIE, said: “At ENGIE, we believe that universal access to electricity is possible in the foreseeable future thanks to a smart combination of national grid extensions, mini-grids and solar home systems, depending on the local characteristics of energy demand. ENGIE is already present along the whole spectrum of solutions with its subsidiaries PowerCorner and Fenix for off-grid solutions, and utility-scale grid connected generation such as Kathu, our 100 MW concentrated solar power plant in South Africa. Within a constantly changing world, it is ENGIE’s role to make a cost-efficient zero-carbon transition possible for the benefit of the African population.”

Today, more than 600 million people or 60% of the population living in sub-Saharan Africa do not have access to electricity.

ENGIE is already a leader in off-grid electrification in Africa, offering clean, safe and reliable decentralised electricity from its mini-grids and SHS to more than 2 million people living in multiple African countries.

ENGIE’s goal is to provide 20 million people around the world with decarbonised, decentralised energy supply by 2020 using the latest digital technologies.

Distributed by APO Group on behalf of ENGIE.

About ENGIE PowerCorner:
ENGIE PowerCorner’s mission is to provide clean and affordable electricity to rural populations in developing countries through smart mini-grids using digital solutions like mobile money and pay as you go technologies. Electricity is produced via solar energy and battery storage offering 24/7 energy services.  ENGIE PowerCorner is positioned across the whole mini-grid value chain as micro-utility, from site identification to investments, operations and billing.

About ENGIE Africa:
For over 50 years, ENGIE (www.Engie-Africa.com) has been active in many African countries through its energy engineering business and more recently as an independent power producer in South Africa and Morocco with a total capacity of 3,000 MW either in operation or under construction. By 2025, ENGIE wants to be a reference partner in several African countries for power plants, energy services to businesses and decentralized solutions for off-grid customers – communities, companies and households. ENGIE already has more than 1.5 million customers with domestic solar installations and local microgrids, and aims to become one of the viable leaders on the continent's off-grid service market. For more information, go to www.Engie-Africa.com.

About ENGIE:
Our group is a global reference in low-carbon energy and services. In response to the urgency of climate change, our ambition is to become the world leader in the zero carbon transition of our customers, in particular businesses and local authorities. We rely on our key businesses (renewable energy, gas, services) to offer competitive turnkey solutions “as a service”.

With our 160,000 employees, our customers, partners and stakeholders, we are a community of Imaginative Builders, committed every day to more harmonious progress.