Tackling piracy : EU’s role crucial for maritime security in the Horn of Africa 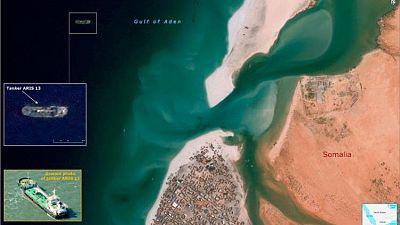 13 March 2017… A group of Somali pirates hijacked an oil tanker off the coast of Somalia with eight sailors on board. Less than four days later the crew was safely back on land, thanks to the EU's military operation EU NAVFOR Operation Atalanta and the key support of the EU's Satellite Centre. EU satellite intelligence was instrumental in helping EU military mission in its fight against piracy, guaranteeing maritime security and human safety.

Maritime security is a priority for the EU as the world's largest trading bloc and as a global security provider. Piracy in the waters off the Horn of Africa reached a peak in 2011, affecting not only local fishing communities but also international commercial and humanitarian vessels. The EU's engagement as a security provider in the region has drastically reduced pirates' attacks to just two unsuccessful attempts in 2018.

The Comoros-flagged merchant vessel, MT ARIS 13, with a crew of eight Sri Lankan sailors, was carrying fuel from Djibouti to Mogadishu when it was approached by two skiffs and then taken by Somali pirates. Since the pirates altered course for the Somali coast and cut off all positioning and communication equipment, the usual automatic location verification for commercial ships could not be used anymore.

The EU's military maritime operation EU NAVFOR Op. Atalanta asked the EU Satellite Centre (SatCen) for support. The Centre performed an analysis of rapidly requested earth-observation imagery. Based on very high-resolution imagery, and after comparison with ground and aerial pictures of the hijacked vessel, the tanker could be located again close to the Port of Xabo, in Puntland in north-eastern Somalia.

Following negotiations between local elders, the Puntland coastguards and the armed pirate group, the oil tanker was released in the evening of 16 March 2017. The ship finally arrived at the port of Bosaso, Puntland on 17 March, four days after the hijacking occurred. No ransom was paid.

The EU Satellite Centre (SatCen) is an agency of the EU located in Spain that supports the EU's security and defence policy. It analyses satellite imagery and geospatial information and conducts training and capability development projects. EU NAVFOR Operation Atalanta is the EU's naval operation that has been successfully fighting piracy off the coast of Somalia for the past ten years, protecting commercial vessels and humanitarian aid alike.