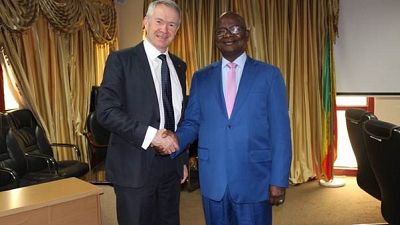 The Registrar of the International Criminal Court (“ICC” or “the Court”) Peter Lewis was on an official visit to Bamako, Mali from 24 to 28 March 2019 to meet with high-level representatives from the Government, the diplomatic community, the United Nations Multidimensional Integrated Stabilization Mission in Mali (MINUSMA), the media, and civil society. This was the Registrar's first visit to Mali since his election in March 2018, to further strengthen support for the Court’s activities in the country.

“As I pay my first visit to Mali, I have all the victims and their families in my thoughts. Assisting the Malian authorities and people in tackling the many challenges the country faces is a shared responsibility,” the Registrar said ICC is determined to do its part, relying on the cooperation, collaboration and invaluable support of all.”

Meeting with Malian Minister of Justice Tiéna Coulibaly on 25 March 2019, the Registrar of the Court thanked the authorities for their support for the ICC’s independent mandate and ongoing operations in Mali. Cooperation and support is essential for the Court to deliver on its independent mandate under the Rome Statute. The ICC relies on the cooperation of States and International Organisations for its activities and for the benefit of the affected communities looking for justice to be done.

The situation in Mali was referred to the ICC by the Government of Mali on 13 July 2012. On 16 January 2013, the ICC Prosecutor opened an investigation into alleged crimes committed on the territory of Mali since January 2012. As part of this investigation, two cases have been opened: The Prosecutor v. Ahmad Al Faqi Al Mahdi, currently at the stage of reparations following conviction of the accused, and The Prosecutor v. Al Hassan Ag Abdoul Aziz Ag Mohamed Ag Mahmoud currently at the pre-trial stage.