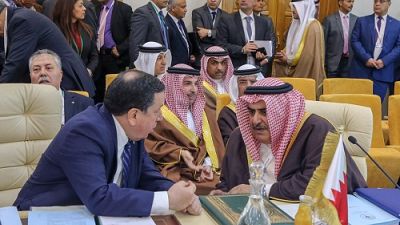 The Minister of Foreign Affairs, Shaikh Khalid bin Ahmed bin Mohammed Al Khalifa, today participated in the Preparatory Meeting ahead of the 30th Arab Summit, due to kick off in the Republic of Tunisia on Sunday 31 March 2019.

The meeting discussed several of the issues tabled for discussion on the Arab Summit agenda and adopted a number of draft resolutions which will be raised to the Arab leaders.

The resolutions dealt with the Palestinian cause, Arab-Israeli conflict, the occupied Syrian Golan Heights and developments in the Syrian Arab Republic, the Republic of Yemen and the State of Libya.

The meeting affirmed absolute sovereignty of the United Arab Emirates over its three islands (Greater and Lesser Tunbs and Abu Musa) and condemned the Iranian interference in the internal affairs of the Arab states, emphasizing resolve to preserve the national security and develop the Arab anti-terrorism system and human rights strategy.

Earlier, Shaikh Khalid had taken part in the consultative meeting of the Arab Foreign Ministers that preceded the preparatory meeting.

Distributed by APO Group on behalf of Ministry of Foreign Affairs of Kingdom of Bahrain.
Media files