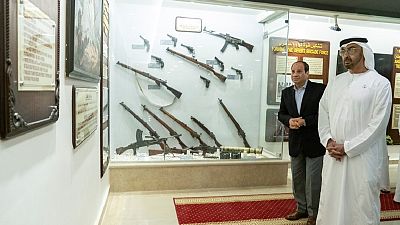 H.H. Sheikh Mohamed toured the museum's five halls, each of which is dedicated to one of the four countries involved in the war, including Great Britain, Italy, Germany, and Egypt in addition to the Joint Hall. The Abu Dhabi Crown Prince listened to an explanation on the history of the museum and its various halls which house items from the war, including huge army tanks and various larger weapons as well as light and heavy equipment.

Sheikh Mohamed signed in the museum's visitor book, saying: “I and my brother President Abdul Fatah el-Sisi visited Al Alamein World War II Military Museum where historical exhibits commemorate the 1942 World War II and bear an indelible witness to a battle that was a turning point in the War. May God bless Egypt, and its people and protect them from all evils.”